Lewis Hamilton dominated the French Grand Prix to continue his best ever start to a Formula One season. Hamilton crossed the line  18 seconds ahead of Valtteri Bottas in the sister Mercedes following an impressive performance at  Circuit Paul Ricard.

Hamilton led every lap of the race as he held off the competition off the line, and didn’t even relinquish his lead when he made his one and only pit stop at the middle of the race, later than most of his rivals bar Sebastian Vettel.

On a perfect afternoon, the five-time world champion extended his lead over Bottas, his closest title challenger, to 36 points.

Ferrari’s Charles Leclerc ran Bottas close in the final stages, but stayed in third ahead of the Red Bull driver Max Verstappen.

“I have been racing a long time but it never gets old,” said Hamilton. “I couldn’t do it without the team. We are creating history together and I am so proud to be a part of it. I am happy. It wasn’t easy at all. There are always things happening and we are on the edge. This has been the best start to a year so we have got to enjoy it.” 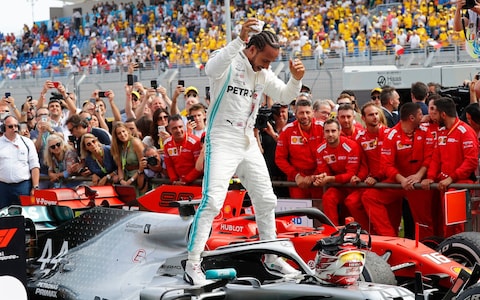 Following his heavy defeat, Bottas said: “It is something I need to have a look at. He [Hamilton] is not unbeatable, I know that, I just need to work hard.”

Bottas came under pressure from Charles Leclerc on the last lap, however the Finn was able to hold him off.

The Monegasque driver was third, picking up his third podium finish of the year. Leclerc was the first of the top three to pit on lap 22, with the two Mercedes’ pitting on the following laps.

Max Verstappen ran a lonely race to pick up fourth place, while his teammate Pierre Gasly went only backwards during the 53 laps, and crossed the line outside the top ten.

Sebastian Vettel took the chequered flag a distant fifth, a full minute down on Hamilton. Vettel may have claimed a bonus point for the fastest lap, but he is a morale-sapping 76 points adrift of Hamilton in the championship.

In a race of rare action, British teenager Lando Norris was unable to build on his career-best qualifying of fifth. The 19-year-old novice lost out to McLaren team-mate Carlos Sainz on the race down to the opening bend, before Vettel’s Ferrari cruised past him on lap five. Then, he was forced to nurse a suspected hydraulics issue to the line.

Norris looked as though he would hang on to seventh but cruelly lost three places on the final lap, to Daniel Ricciardo, Kimi Raikkonen and Nico Hulkenberg, finishing 10th and taking just one point. Norris’ fellow British rookie George Russell finished last as he was beaten by Williams team-mate Robert Kubica for the first time this season.

So, the final standings are these: