Ayrton Senna signed with Toleman in December 1983, and in the 1984 season he had great races with a car that was far from being one of the strongest on the F1 starting grid. Besides introducing himself to the world with a spectacle on the streets of Monaco, in the rain, Ayrton was also able to score points in four other races that year. Take a look back:

In his second F1 race, Ayrton Senna showed he wasn’t a driver like any other. He finished in sixth, after starting in 14th, and scored his first point in the main category of motor sports, after one of the most exhausting races of his career.

Three weeks after scoring his first point in F1, the Brazilian was eager to finish within the top-six once again at the Zolder circuit. This time, the task was even harder, since Senna had qualified in a modest 19th place. Senna adopted a cautious tactic to preserve his tires, but it didn’t matter: he was forced to keep his Toleman on the track through sheer physical strength, because it was understeering a lot and was a famously heavy car to drive. Ayrton finished in sixth place, after Stefan Bellof was disqualified, and celebrated the result. 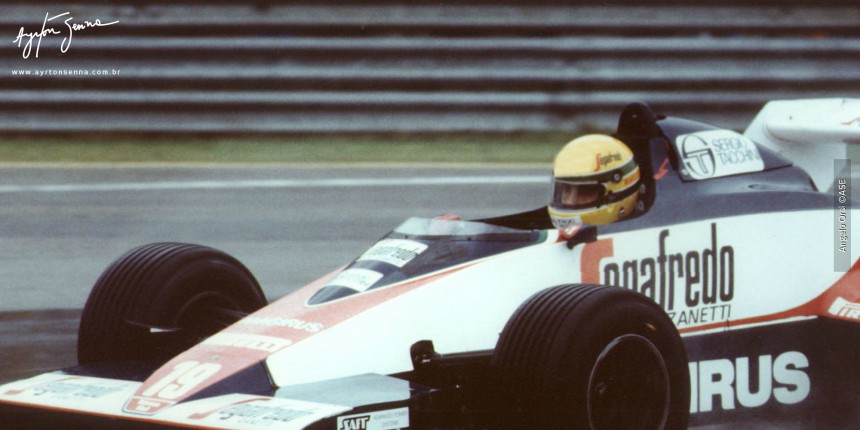 Under heavy rain, in Monaco, Ayrton Senna made his greatest race in 1984, starting in 13th place and finishing in second, after overtaking experienced drivers like Michele Alboreto, Niki Lauda, Rene Arnoux and Keke Rosberg. Ayrton was getting closer to Alain Prost, who was in the lead, when race director Jack Yckx suspended the race. Only half the points were awarded, since just 31 laps were concluded.

In the second half of the season, Senna was able to get better positions for his Toleman on the grid. At Brands Hatch, he started in seventh place, fell to eighth at the start, but was able to recover and overtake Nelson Piquet, Patrick Tambay, Alain Prost, Elio de Angelis and Keke Rosberg to finish in third. It was his second podium in F-1, which merited a round of applause from Niki Lauda, who won with his McLaren.

Senna had his Best starting position with Toleman at the Estoril Raceway, in Portugal, the final race of the 1984 season. With a third place on the grid, Senna kept a steady pace throughout the race and fought to the end to keep the position that would secure him a place on the podium. Even with pressure from Michele Alboreto, Senna stayed in third and wrapped up his season with 13 points and three podium-finishes.

This website uses cookies to improve your experience while you navigate through the website. Out of these cookies, the cookies that are categorized as necessary are stored on your browser as they are essential for the working of basic functionalities of the website. We also use third-party cookies that help us analyze and understand how you use this website. These cookies will be stored in your browser only with your consent. You also have the option to opt-out of these cookies. But opting out of some of these cookies may have an effect on your browsing experience.
Necessary Întotdeauna activate
Necessary cookies are absolutely essential for the website to function properly. This category only includes cookies that ensures basic functionalities and security features of the website. These cookies do not store any personal information.
Non-necessary
Any cookies that may not be particularly necessary for the website to function and is used specifically to collect user personal data via analytics, ads, other embedded contents are termed as non-necessary cookies. It is mandatory to procure user consent prior to running these cookies on your website.
SALVEAZĂ ȘI ACCEPTĂ