Ayrton Senna, 5 Wins in the USA. All on street circuits.

The United States F1 Grand Prix takes place this weekend, at the Austin speedway, which made its debut in the category six years ago. Back in Ayrton Senna’s day, most US GPs took place at street circuits, where the Brazilian never disappointed: he won five times in the United States – three of them in Detroit and twice in Phoenix. Check out Senna’s victories in the US.

This GP was marked by an interesting story. While Senna made his fans happy on the track, at the football pitches of the FIFA World Cup, which was taking place in Mexico, Brazil was eliminated from the competition on the eve of the race, after losing to France – the homeland of many mechanics and engineers who worked at Renault, the maker of Senna’s engine. On Sunday, Senna made Brazilians proud again by celebrating his win with a gesture that would come to follow all his victories. The driver stopped during the cool-down lap, grabbed a small Brazilian flag and effusively raised it, taking a lap while holding it high. From that day forward, Senna began showing the pride he took in defending his country’s colours in the main motor sports competition in the world. And after each triumph, Globo TV announcer, Galvão Bueno, started calling the winner Ayrton Senna “of Brazil”.

After his first win at Detroit in the previous year, Senna once again celebrated on the streets, this time behind the wheel of the yellow Lotus. The Brazilian started in second place and trailed Nigel Mansell (Williams) for 33 laps. When the Britton stopped to change tires, Senna took the lead and stayed there. In a risky bet, he took care of his tires and didn’t make a pit stop, unlike most of his opponents. 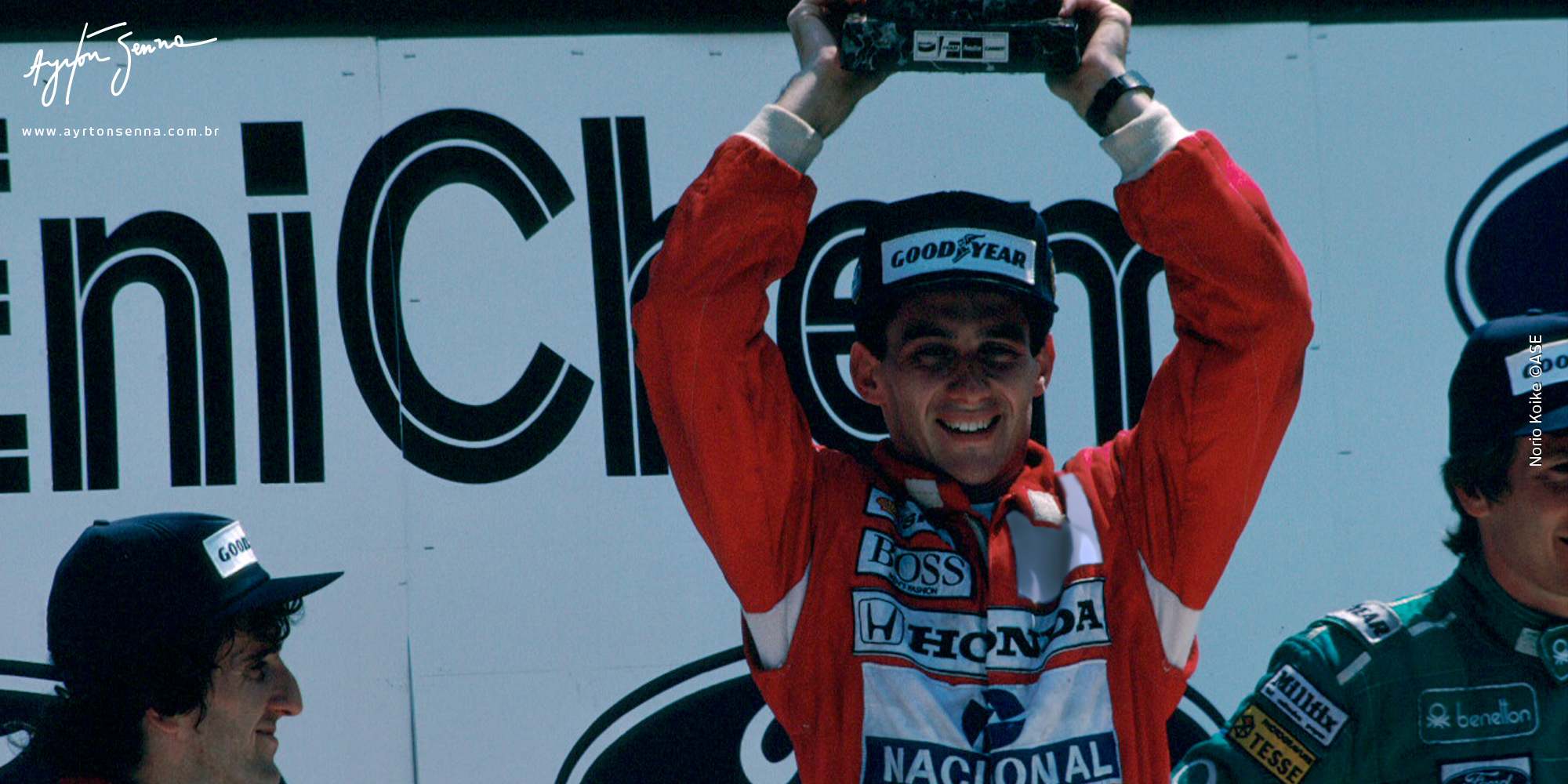 At the 1988 Detroit GP, Senna scored his sixth pole position in six races that year – an amazing performance that started bothering his McLaren teammate, Alain Prost, who was a two-time world champion (1985 – 1986). Not giving his adversaries any chance, Senna led the race from start to finish, crossed the finish line 38 seconds ahead of Prost and, to boot, lapped Thierry Boutsen, who came in third with his Benetton.

Surprisingly, a heavy rain fell over the Arizona desert during the Saturday qualifying sessions for the 1990 Phoenix GP, which meant that the times posted on Friday were the ones that counted. That led to Ayrton starting in fifth place. On Sunday, Senna was able to jump ahead to second during the first few laps, but Jean Alesi wasn’t interested in giving up his spot. Senna intensified his pursuit and, on lap 34, he overtook Alesi at the end of the main straight. But the Brazilian couldn’t have predicted that Alesi was going to get revenge on the very next corner, taking back the lead.

On the following lap, the Brazilian made clear why he was the front-runner for that year’s title: when both drivers braked at the same time on the same corner, Ayrton Senna’s McLaren took the inside lane and made it impossible for Alesi to recover. The Frenchman even tried the same manoeuvre again, but this time Senna didn’t budge and closed the door on the Frenchman. It was Senna’s fourth win in the US.

Unlike in the previous year, Senna didn’t have to start in fifth to win in Phoenix. In 1991, he took the pole by being one second faster than Prost (Ferrari) and led the race for all 81 laps, until he got the chequered flag. The win in Phoenix was the start of an impeccable season, when he won the year’s first four GPs, opening up a commanding lead that would come in handy at the end of the season against the Williams driven by Nigel Mansell and Riccardo Patrese.