Lewis Hamilton secured a peerless victory at the Abu Dhabi Grand Prix to sign off another title-winning campaign in style. Max Verstappen and Charles Leclerc joined Lewis Hamilton on the podium, although Bottas could yet be promoted to third place, with Leclerc racing under the threat of disqualification from the race.

Hamilton’s 50th pole-to-win of his career was arguably his most straightforward victory this season, as he comfortably eased away in the early part of the race before enjoying an untroubled run to the flag, to maintain Mercedes’ 100% win record at Yas Marina since 2014. It also meant that Hamilton tied his hero Ayrton Senna’s record for the 19th lights-to-flag victory of his career.

The season-finale in the Emirates played out in familiarly low-key fashion, especially at the front where Hamilton simply blasted clear from the off.

GP win number 84 of Hamilton’s career puts Michael Schumacher’s record of 91 victories even closer in sight, with another title charge in 2020 likely for the Mercedes star.

Verstappen and Leclerc will be expected to lead the charges against Hamilton next year, provided Ferrari and Red Bull can produce suitable machines. But neither could cling onto Hamilton’s coattails around Yas Marina, Verstappen providing one of the race’s highlights with a smart move on Leclerc as both negotiated their way y the back-marking Williams of George Russell, who ends 2019 as the only pointless driver on the grid.

Verstappen had held out hopes of pressuring Hamilton off the start to challenge for victory, but ultimately had to settle for P2, ahead of Leclerc. The Ferrari driver, however, is set to be investigated after the race for a fuel discrepancy reported ahead of the start of the Grand Prix

Behind the podium trio, Valtteri Bottas recovered from a back-of-the-grid start to end up fourth, less than a second behind Leclerc. A penultimate lap pass by Sebastian Vettel on Alex Albon gave the Ferrari driver fifth, while a fascinating last-lap scrap between Lando Norris and Sergio Perez saw Perez ultimately come out on top to claim ‘best of the rest’ in P7, ahead of Norris. Daniil Kvyat was ninth for Toro Rosso, while Carlos Sainz also made a last lap pass, on Renault’s Daniel Ricciardo, to take a point for P10 – enough to see him claim sixth in the drivers’ standings for 2019.

Although Bottas could yet inherit the third position in the race due to an investigation by the stewards into the fuel system of Leclerc’s Ferrari, he could not pass Leclerc on-track, but finished ahead of fellow front-runners Sebastian Vettel and Alexander Albon, the Ferrari man taking fifth place late in the race after a poor pit-stop had hampered his earlier efforts. The Finn’s progress through the field was made all the more impressive by an 18-lap wait for DRS to be enabled due to a technical fault. 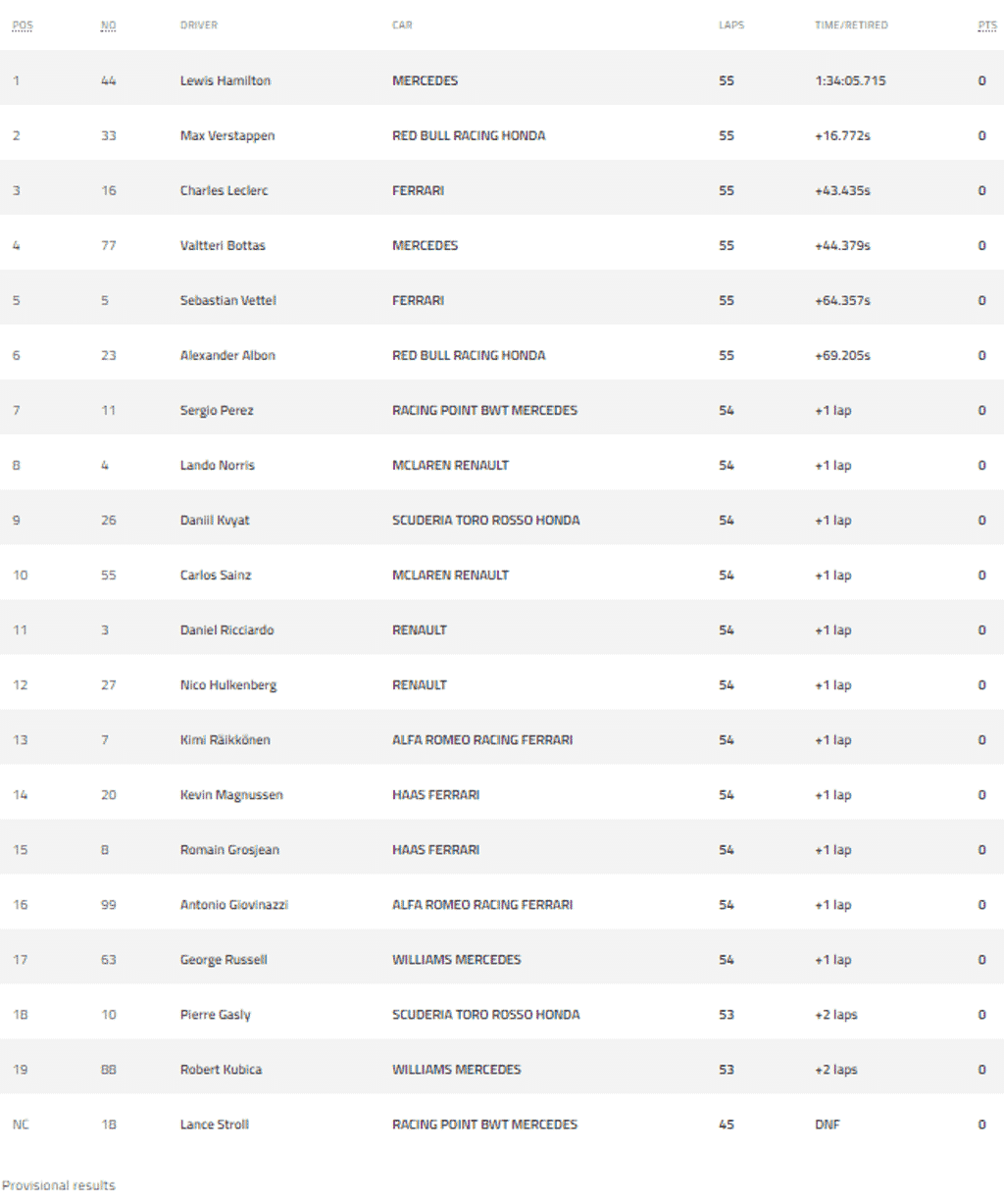