Zolder 24 Hours podium finisher Alex Cascatău will be back behind the wheel of a Norma M20FC this weekend as he begins his preparation...
More
2 June, 2019

LMP1 Class:
Sebastien Buemi’s best time came about half an hour before the end of the second 4-hour Testing Session of today. The weather conditions made for a hot day with high track temperatures. Sebastien Buemi was the only driver who manages to duck below the 3:20 mark with setting a 3:19.440 lap time in his Nr. 8 Toyota.

Last years fastest time (3:19.066) on the Le Mans Test Day was not broken, but Buemi still ended the day comfortably in top of the timing sheets, just over a second clear of the sister Toyota with Nr. 7 which also topped the timing sheets on some occasions during today’s Le Mans Test Day. The Nr.8 Toyota was also 2.7 seconds faster than the fastest non-hybrid Privateer LMP1, the Gibson powered Nr.1 Rebellion R-13.

Both Rebellion R-13 cars came out on track with their new low-downforce aero-packages, after testing these at Spa-Francorchamps, yet similar to Toyota they were not beating their best time set by a Rebellion R-13 during last years Le Mans Test Day, which was a 3:19.680. This time around, the Swiss team’s best lap time was a 3:21.323 set by Andre Lotterer.

Both SMP Racing BR1 cars followed the Rebellion Nr.1 shortly, finishing in fourth and fifth place on the timing sheets, respectively 3.4 and 3.9 seconds behind the time set by Sebastien Buemi in his Toyota. All four Rebellion and SMP cars lapped within a second of each other today.

In sixth place the DragonSpeed’s BR1, the American team had a troubled day, only managing 31 laps, the lowest number of laps in LMP1 class. Ride height issues in the morning and a gearbox problem during the afternoon meant the team had a busy day in their garage.

Dutch driver Renger van Der Zande was still positive about the potential of their car and was convinced that the team would be in the mix in the lap times had it not hit traffic at the Porsche Curves during its quicker laps. 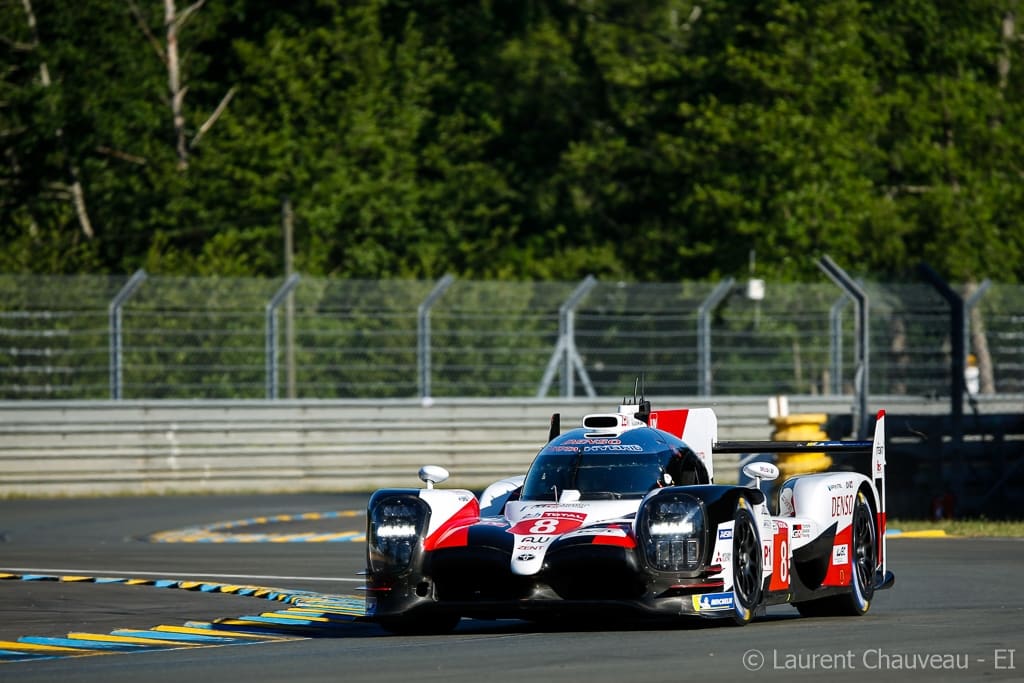 LMP2 Class:
Ho Pin Tung turned out to be the pace-setter in LMP2, with a 3:28.504 lap time set in the last minutes of the afternoon session. This was fast enough to put the Nr.38 Jackie Chan DC Racing ORECA ahead of the DragonSpeed ORECA which was widely expected to be fastest.

“I hope we can keep this one-lap performance up for race week. I don’t think anyone is showing their hand. I’m sure when Qualifying comes in race week we will produce good lap times,” said Tung. “Being quickest doesn’t always mean you’ll win the race though. The competition is hard in LMP2, there are only four points between our car and the Alpine. We will be pushing!”

Pastor Maldonado brought his DragonSpeed home in second place with a 3:28.769, while Nicolas Lapierre put the WEC points leader Alpine in third place.

The fastest of the other chassis in the class ended up seventh, the Racing Team Nederland Dallara ending up two seconds off the top time in LMP2 Class.

Further down the order, there were plenty of rookies getting up to speed with the Circuit de la Sarthe today in LMP2. Arjun Maini was one of them, the former F2 racer with Trident and Haas F1 development driver, who is driving in LMP2 for the first time this year with RLR Msport in the ELMS was really encouraged by his first day of track action at Le Mans. The Indian driver said it’s taken a bit of time to get up to speed with the 13.6km circuit, but he now feels comfortable ahead of race week. RLR’s ORECA ended up 14th with a 3:32.192. 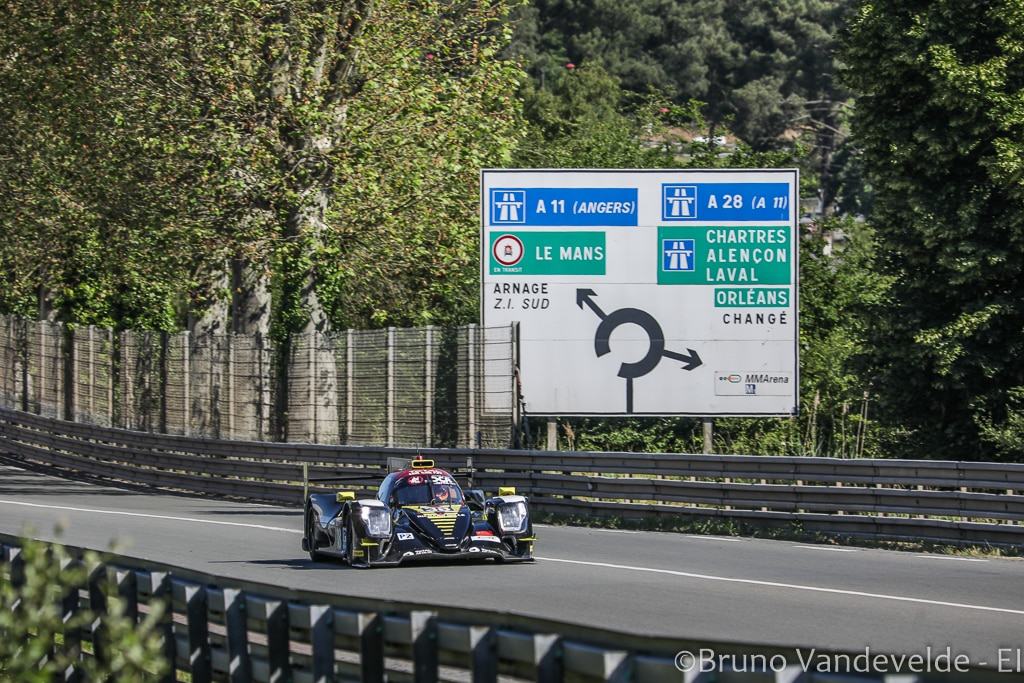 “It’s always nice to be the fastest driver, but the Test Day is not what counts,” Rockenfeller said. “It was fantastic for me though as sometimes I struggled coming from a DTM car to a GTE car. Last year I just did the race and missed the pre-test, so today I got lots of laps in. I think the morning the circuit was greasy but it got so much better towards the end.”

Completing the top three in the class were the Nr.67 Ford GT and the Nr.64 Corvette C7R, which improved it’s pace throughout the day.

The top 15 in GTE Pro ended up within 1.2 seconds of each other, the only cars truly off the pace being the two BMW Team MTEK M8 GTE’s, which were over two seconds off at the bottom of the timing sheets.

A couple of cars suffered issues during the Test in Pro, the #95 losing a lot of track time with an electrical issue which brought out red flags in the morning session after Marco Sorensen stopped at the Porsche Curves.

Risi Competizione’s Ferrari 488 GTE was also in some trouble. The team’s new driver Oliver Jarvis, who was one of 12 drivers that flew straight to France from the IMSA Detroit GP overnight, ground to a halt at one of the chicanes down the Mulsanne Straight, bringing out a safety car.

The car also suffered a sensor issue, which cost the team further time after it lost two hours of the morning session due to the timing of the drivers’ briefing for the latecomers. 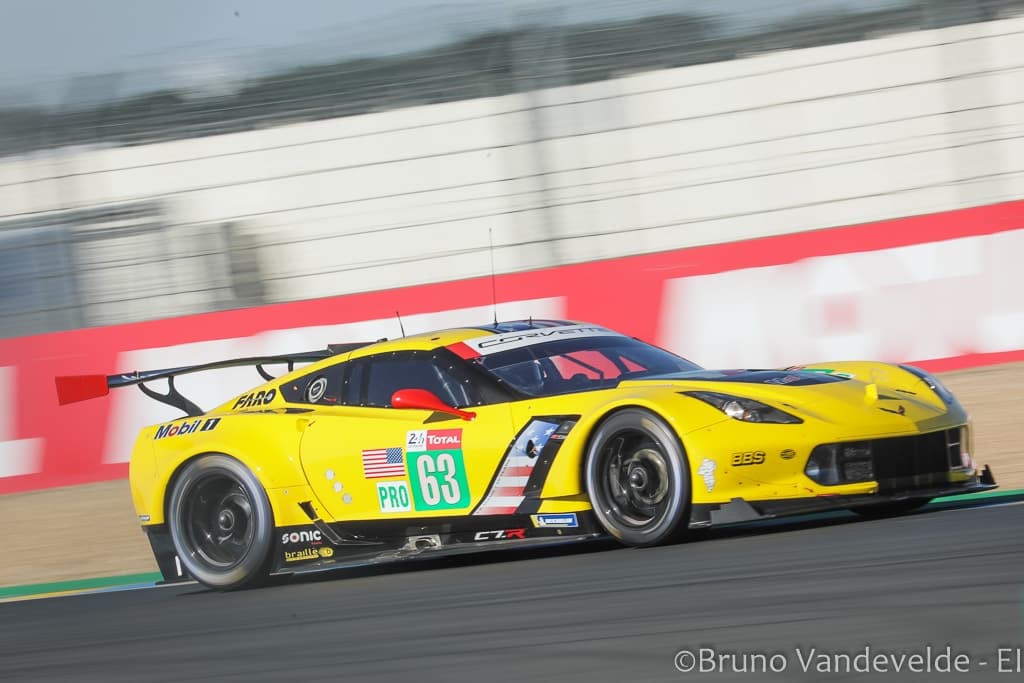 GTE Am Class:
WeatherTech Racing ended up leading the tables by means of a 3:56.862 lap time set by Toni Vilander in the Nr. 62 Ferrari 488 GTE. The team’s 3 drivers, (Toni Vilander, Rob Smith and Cooper MacNeil) all had travelled in from far, but had a strong day of running. Vilander and MacNeil flew in from Detroit while Rob Smith drove to Le Mans from Paul Ricard, the former GTE Am class winner had been competing in the Blancpain Endurance Race on the French circuit. “It’s been a busy schedule for me the past six weeks,” said Vilander after the day’s running. “It’s been a positive day. Our story is different, we don’t race in the WEC, we have a brand-new car that was used on a racetrack for the first time today. For us it was important to see the car was performing well. We’ve all come from America, and I’m proud to be here and part of this programme. “We were six seconds from the pole position from last year, so that says it all, there were lots of cars on fast laps diving into the pits.”

Best of the rest was the Gulf Racing Porsche, 8 tenths off the pace in this class. 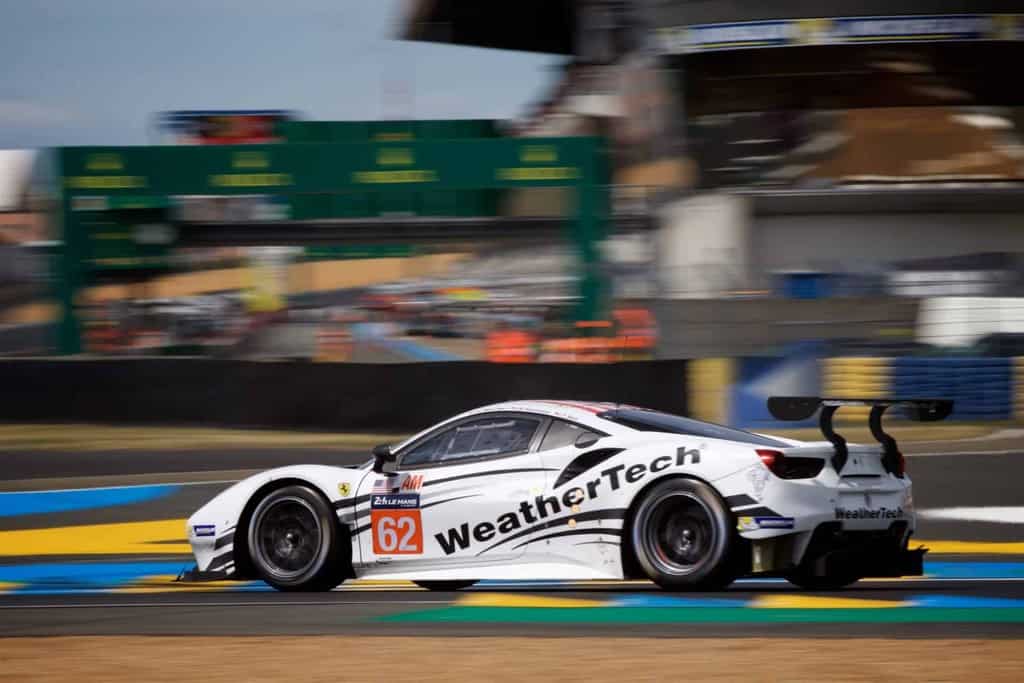 When we started with the GP24 project on the first of June 2018 and started the Facebook page on August 4th 2018, we monitored...
Read more
Endurance

Sunday marked the first time in almost a year that Alex Cascatău has stepped behind the wheel of a Norma M20 FC and it...
Read more
Endurance

Zolder 24 Hours podium finisher Alex Cascatău will be back behind the wheel of a Norma M20FC this weekend as he begins his preparation...
Read more

F1: Ferrari will not be a happy family in 2020 says Brown