Zolder 24 Hours podium finisher Alex Cascatău will be back behind the wheel of a Norma M20FC this weekend as he begins his preparation...
More
31 July, 2019

The 12th round of the Formula 1 World Championship brings us to Hungary, more specifically to the Hungaroring, a lesser-known European circuit, but with a rich history in Formula 1. In 1986, Bernie Ecclestone insisted on bringing his “Great Circus of F1” behind the “Iron Curtain”, and the idea was inspired because it has not left the F1 calendar until today. Names like Ayrton Senna, Michael Schumacher and not least Lewis Hamilton have been winners on the Hungarian circuit countless times. The Brit from Mercedes became the most successful driver on the Hungaroring, with a total of 6 wins.

Hungaroring is a circuit that has remained largely the in same configuration since 1986, the first change in the track’s layout was carried out in 1989, when the chicane after the actual turn three (a temporary measure put in during construction due to the discovery of a spring where the direct route was due to run) was removed by culverting the stream. In 2003, the main straight (turn one, see diagram) was lengthened by roughly 200 m to 908 m, and the hairpin at the end of the straight was also tightened in an attempt to facilitate more overtaking opportunities, as well as a tightening of what was turn 12. Besides, this is the biggest problem of this circuit, the lack of opportunities to overtake. The cause of this problem can be found in the design of the modern era single-seat cars and their violent aerodynamics that have not allowed the cars behind to sit too close, but it is worth taking a look also at the actual configuration of the circuit.

The 14 corners (8 right, 6 left) form a 4,381 km lap, a relatively short distance, being 6th in the shortest circuits in the calendar, only 20 meters longer than the circuit in Canada. It’s main passing point is the start/finish line, being the first DRS zone, followed by the second shorter DRS zone, between turns 1 and 2. Some drivers launch attacks on the short straight line between turns 11 and 12, but it’s risky because they risk being overtaken again in two corners when the driver they overtook has remained within the 1 second DRS distance. The fact that this is not a circuit used very often, causes dust being deposited on the asphalt and in addition to pose problems to pilots on Friday especially. Things are improving, however, until Sunday, as the support races help remove the dust layer. The asphalt is a relatively new one, the circuit having been resurfaced 3 years ago with the occasion of the first reconditioning of the circuit.

The 34th edition of the Hungarian Grand Prix comes 7 days after probably the most spectacular race of recent years (Canada 2011 being a good contender) where Max Verstappen prevailed after making 5 pit stops. Rain is a very rare weather event in the Hungaroring area, especially during the period chosen by the organizers, when the temperatures reach 40 degrees Celsius. In fact, the first Hungarian Grand Prix in the rain took place 20 years after the first race organized there when Jenson Button prevailed after starting from 14th position.

Strategy plays a very important role in Hungary, perhaps a little more than in most other Grand Prix, because the timing of pit stops and their speed can provide the driver with quick stints, without too much traffic. Speaking of strategy, Pirelli has published the number of tires chosen by each team, which you can see in the graph below. 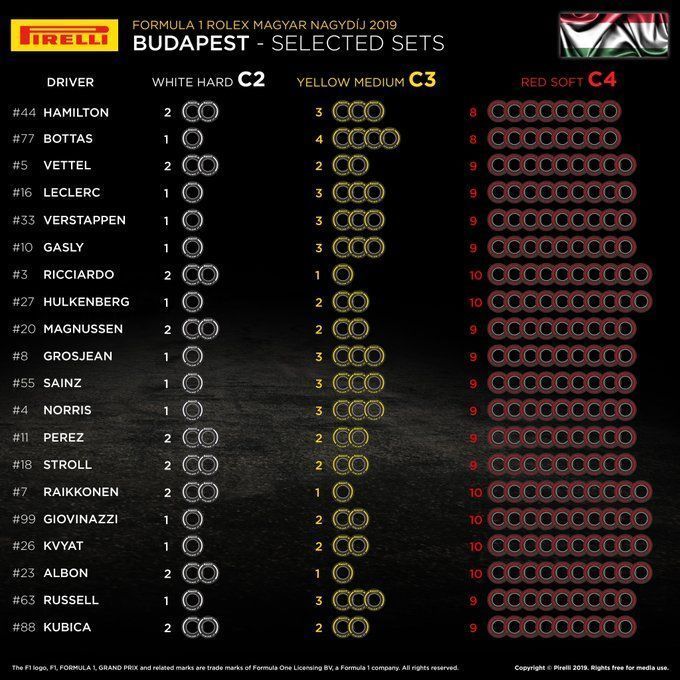 The degree of wear is quite high due to the relatively fresh asphalt and the fact that it is not used very much between Formula 1 races. Thus, the high numbers of Soft compound tires are necessary for the qualifying session, but also for the Friday free practice sessions to find the best setup for the weekend. The higher number of Soft tires chosen by the first three teams could be explained by their desire to set the fastest time in Q2 with a set of Medium compound tires to start with that set in Sunday’s race. Of course, this is an advantage because it allows teams to have greater flexibility about when they choose to call the pit stops for the mandatory pit stop. However, they allow themselves to try this strategy because they can qualify in Q3 even on a set of Medium compound tires, which is usually 0.6-1 seconds slower than a set of Soft compound tires.

The weather forecast for this weekend is a bit unusual for the Hungarian circuit, with temperatures staying below 30 degrees Celsius, and on Friday and Saturday, there are chances to see some raindrops.