Oliver Rowland has taken the pole position for the sixth round of the FIA Formula E Championship in Sanya. The Briton in the Nissan prevailed against Jean-Eric Vergne (DS) and Antonio Felix da Costa (BMW). Fourth place went to German Audi driver Daniel Abt. Sebastien Buemi, who was the clear favourite in the super pole after finishing in first place in the group stage, made a curious mistake on his fastest lap.

In Group 1, as usual, the top five drivers of the championship went on the track. Antonio Felix da Costa confirmed his strong pace from practice and clinched the provisional best time in the BMW with more than four tenths of a second advantage. Jerome d’Ambrosio lined up behind the Portuguese and defeated Lucas di Grassi, who was only third in his group in the Audi. Edo Mortara finished in fourth place. Championship leader Sam Bird disappointed with almost seven tenths of a second behind him and the final rank in his group.

In the second quintet, all three German drivers were convincing: Daniel Abt placed his Audi fastest in his group in second place, closely followed by Andre Lotterer. Pascal Wehrlein made it to No. 5, but this time lagged behind teammate d’Ambrosio. Robin Frijns came in 8th. Mitch Evans came in tenth on the right flank after a slight contact with a wall.

In Group 3 Alexander Sims opened with a strong lap, again underlining the pace of BMW in Sanya. The Briton ranked second and pushed di Grassi already out of the super pole. Then came the two Nissan’s who had already dominated the training sessions. Sebastien Buemi delivered by far the fastest lap, and Rowland also came in fourth with a strong time. Also Jean-Eric Vergne managed a good round, which was enough to 5th place. Felipe Massa finished 13th, Oliver Turvey 15th.

Gary Paffett opened the last group with a miserable round. HWA team-mate Stoffel Vandoorne also slowed slightly in turn 3. Nevertheless, the Belgian landed at least 13th on the grid and was again the best in his qualifying group. Lopez finished 14th just behind him, while Tom Dillmann and Felipe Nasr finished 17th and 18th. Nelson Piquet jr. made the next desolate qualifying lap and finished last behind Paffett.

Several surprises in the super pole
As sixth of the group stage Daniel Abt opened the super pole. The German delivered a good overall round, but left a lot of time in the first sector. Vergne had a better lap. The reigning Formula E champion defeated Abt by just under three-tenths of a second and took the provisional lead. Then Rowland became the first Nissan driver. While not reaching Vergne in Sector 1, he did better in Sector 2 in particular. In the end, he had a tenth of a second ahead of the Frenchman.

Then a shocking moment for Alex Sims. The Briton was already in the pit lane to go for his quick lap. But suddenly his mechanics pushed him back into the pits – no super pole lap for the BMW driver! “We could not put the gears in, no idea why, it’s never happened to us before,” Sims explained shortly after the session.

Instead, Felix da Costa went out, but also fell short of expectations: The Portuguese pilot came after a spectacular spin only to third place – still a good starting position for the race. Already at this time it was clear that Nissan would get the pole position. But surprisingly, Buemi almost made the same mistake he had already made in the second free practice: he drove too fast through turn 3 and slid head-on into the TecPro barrier and later complained of brake problems.

The pole position of Sanya went thus to his teammate Oliver Rowland – his first in the Formula E. Second was Vergne before Felix da Costa, Abt, Buemi and Sims. Race start in Sanya is at 8 o’clock Central European Time time. 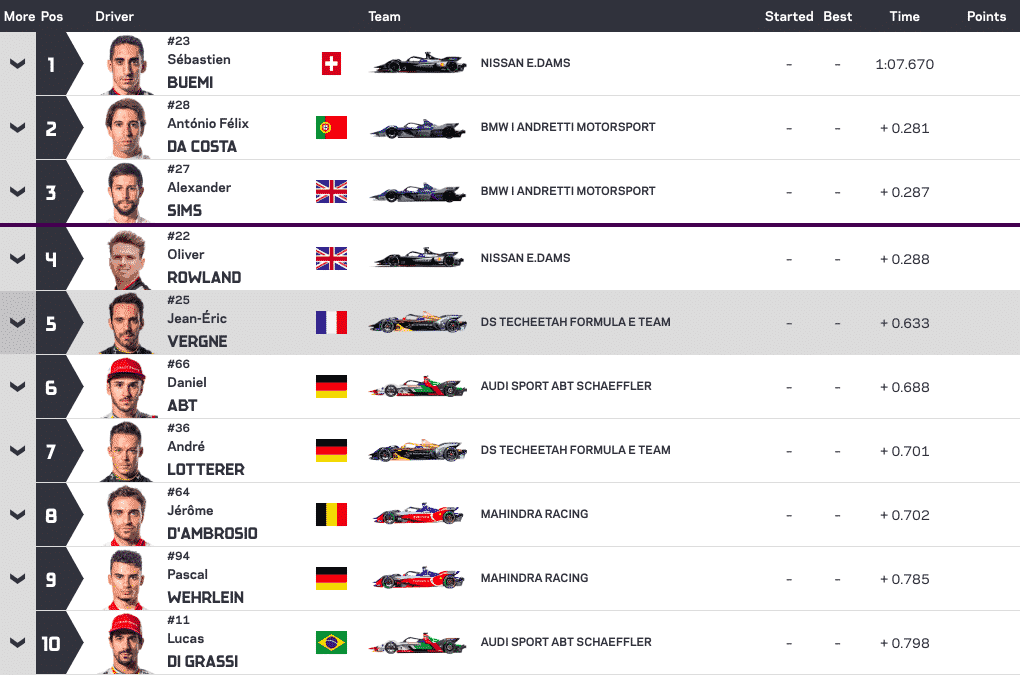