With only 6 races remaining until the end of the season, Formula 1 returns to Russia for the sixth time. Russia made its debut in the Formula 1 World Championship in 2014 with the circuit arranged around the Olympic Park in Sochi.

The only winners in the short history of the big prize were Mercedes. Lewis Hamilton claimed 3 wins in 2014, 2015 and 2018, Valtteri Bottas got his first career win here in 2017 while Nico Rosberg paved the way for the title in 2016 with the victory at Sochi. This year the race takes place towards the end of the season, a move that took place last year after the Malaysian Grand Prix was cancelled, and its place on the calendar had to be taken by another race.

The Black Sea circuit is known especially for its famous turn 3, a true test for the physical condition of each pilot. The cars will have to complete a half-circle arch around the “Olympic Medal Plaza”, the place where the medals for the 2014 Winter Olympics were awarded. Straight lines are another important aspect, the start/finish line and the area between turn 10 and 13 offers a major advantage to top speed teams. 11 right turns combined with 7 left turns form a 5,848 km lap which is driven clockwise. Holder of the fastest time here at Sochi is Valtteri Bottas with 1:31,387 during the 2018 qualifiers, but also with a 1:35,861, the fastest time during the race.

Teams did not come with much news and/or updates in Russia given the short time after the Singapore Grand Prix, but I want to take this opportunity to discuss the engines used by each driver and team so far. In the image below you can see the few pilots who are still running their third engine and have not been awarded penalties (yet). Ferrari, Mercedes, Haas, and Williams are the only teams that seem to be able to use only 3 units for the entire season. It can be seen how the third Ferrari engine brought to Italy, combined with the new aerodynamic package from Singapore, overlaps with their return on the first step of the podium.

Instead, at the other end of the spectrum, we find the Renault and Toro Rosso drivers, with 5/6 engines used so far. Renault has decided to take these penalties to come up with frequent upgrades in order to develop the power unit that brought them that excellent result in Italy (4th and 5th). For the same purpose, Toro Rosso pilots had to start from the back-end of the grid more often to develop the Honda engine for them and for the big sister team, Red Bull Racing. 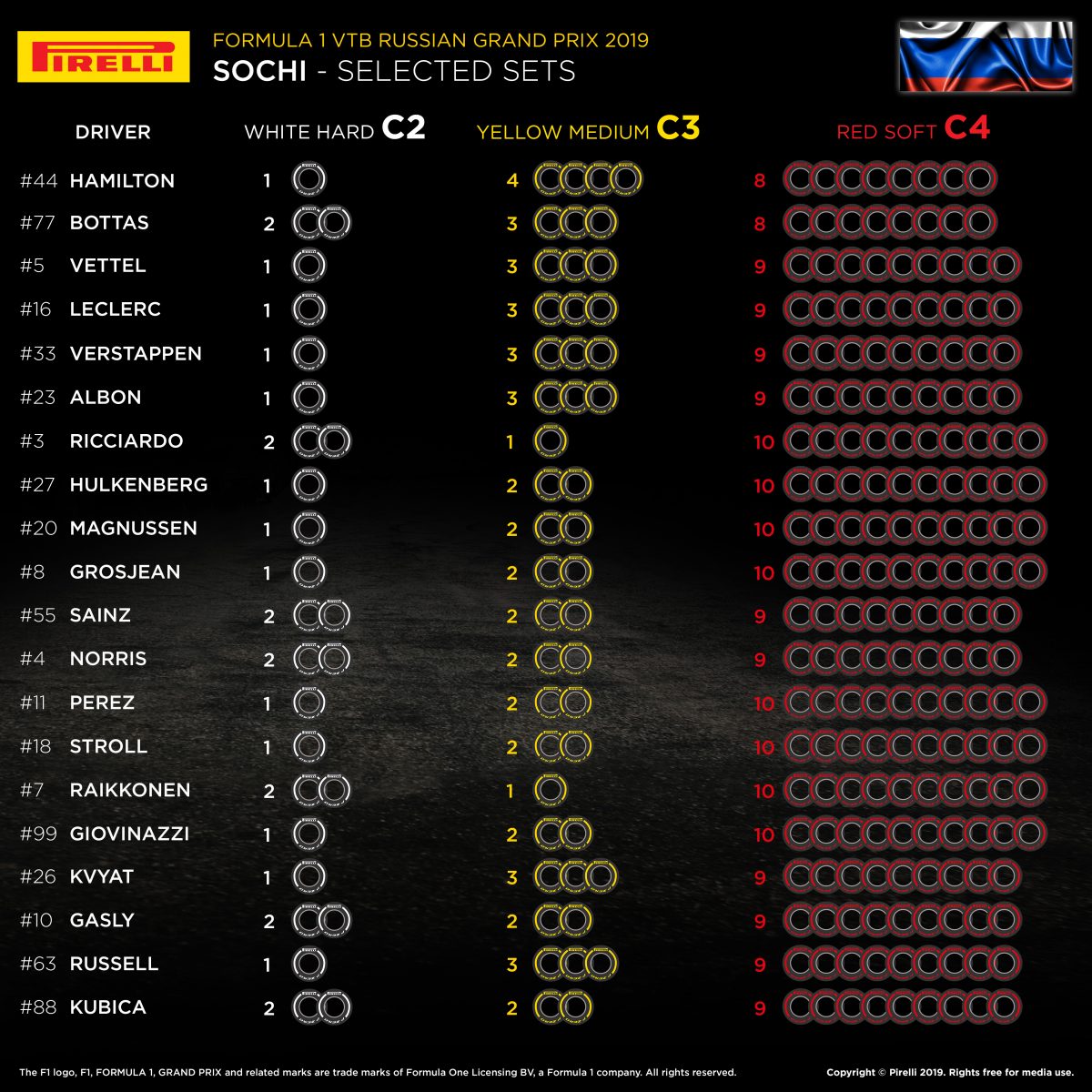 Looking at the tire selection, choices by the teams and drivers are pretty standard, Soft tires will be used extensively in qualifications and training, and the Medium and Hard ones remain for Sunday’s race.

With regard to the weather forecast, the temperatures seem to be stable around 21-23 degrees Celsius, with chances in excess of 50% of rain for Saturday and Sunday.