Lewis Hamilton topped the timesheets in FP3 ahead of qualifying for the 70th Anniversary Grand Prix at Silverstone, one place in front of his Mercedes teammate Valtteri Bottas, as Lando Norris put his McLaren in P3 – 0.581s off Hamilton. 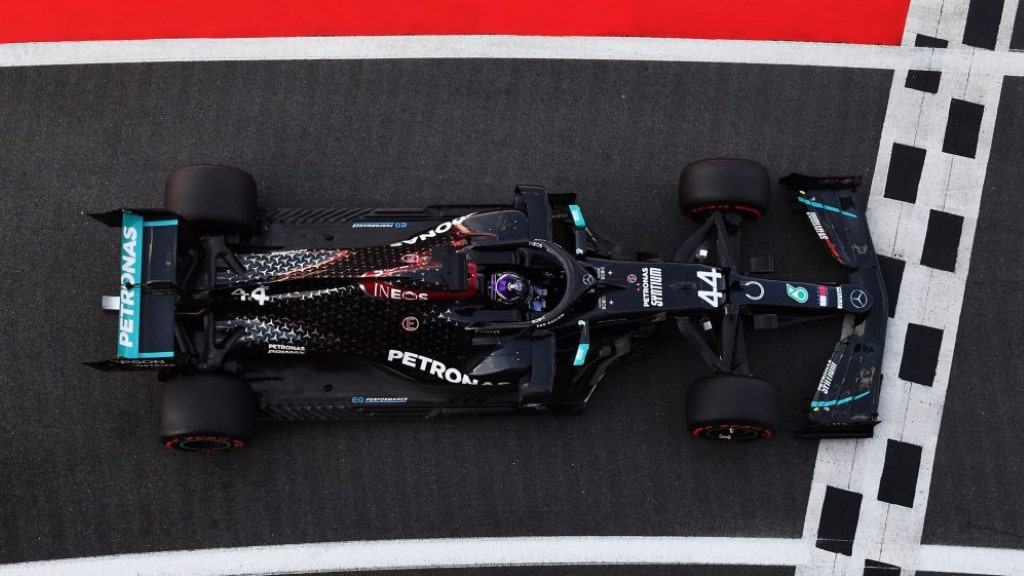 The hour-long session began with Ferrari and McLaren sharing the track as it took 25 minutes for Mercedes to emerge. With 15 minutes remaining, the Silver Arrows began their qualifying runs on soft tires, and eventually it was Hamilton who beat Bottas with the fastest lap of 1m26.621s, 0.163s faster than the best the Finn could manage.

Norris, who began the session on softs but moved to mediums with 30 minutes remaining, managed to make it to P3 on those compounds (the only driver to set his fastest lap on mediums) – which bodes well for him for qualifying at 1400 local time. His teammate Carlos Sainz ended the session on medium tires and finished P10, 1.006s off top spot. 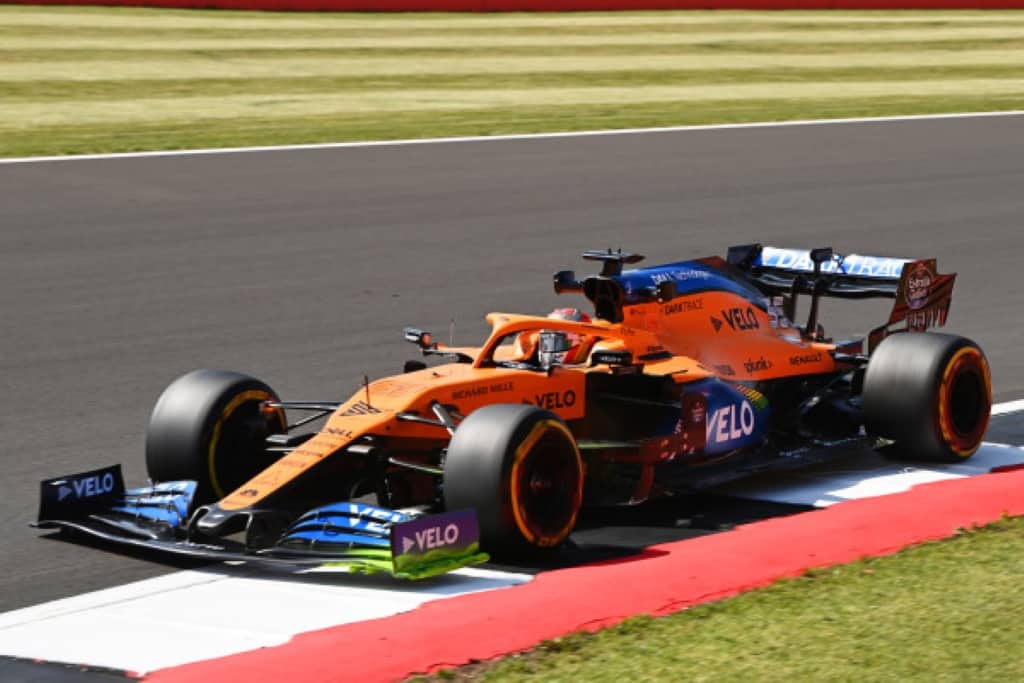 Sixth-place Charles Leclerc and Ferrari teammate Sebastian Vettel, who ended the session in P13, took brand-new engines, turbos, and MGU-H units ahead of FP3 – with Vettel’s Ferrari power unit having spluttered to a halt at the end of FP2 on Friday. According to Ferrari, the change on Leclerc’s car was done “as a precaution”, with no penalty incurred for either driver since they are still within their allocation for the season.

Max Verstappen had to abort his first flying lap on new soft tires with ten minutes remaining having encountered a slow-going Stroll through Maggotts/Becketts, which led to an expletive-filled rant over the radio. The Red Bull driver later improved to finish P7, ahead of teammate Alex Albon in P8. 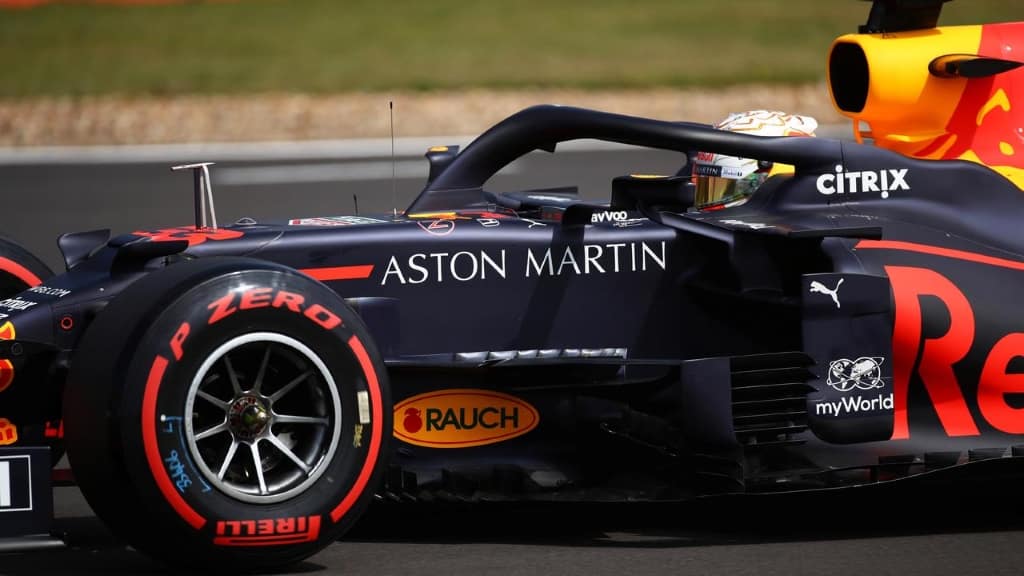 Renault’s Esteban Ocon managed a ninth-place finish over midfield rival Sainz, while Daniel Ricciardo – who was an impressive third quickest in FP2 on Friday – finished 14th overall as his final flying laps were hampered by traffic.

Pierre Gasly beat his AlphaTauri teammate by a tenth of a second to finish P11, with Daniil Kvyat P12 ahead of Vettel’s Ferrari. Vettel was one of just four drivers to use mediums in the session, the others being teammate Leclerc and the McLaren duo.

The Alfa Romeo pair, led by P18 Antonio Giovinazzi over Kimi Raikkonen, finished behind the Williams duo, with Nicholas Latifi in front of George Russell as they occupied P16 and P17.

Rounding out the standings was Kevin Magnussen, 2.142s off the pace as his Haas teammate Romain Grosjean was seven-tenths faster in P15. 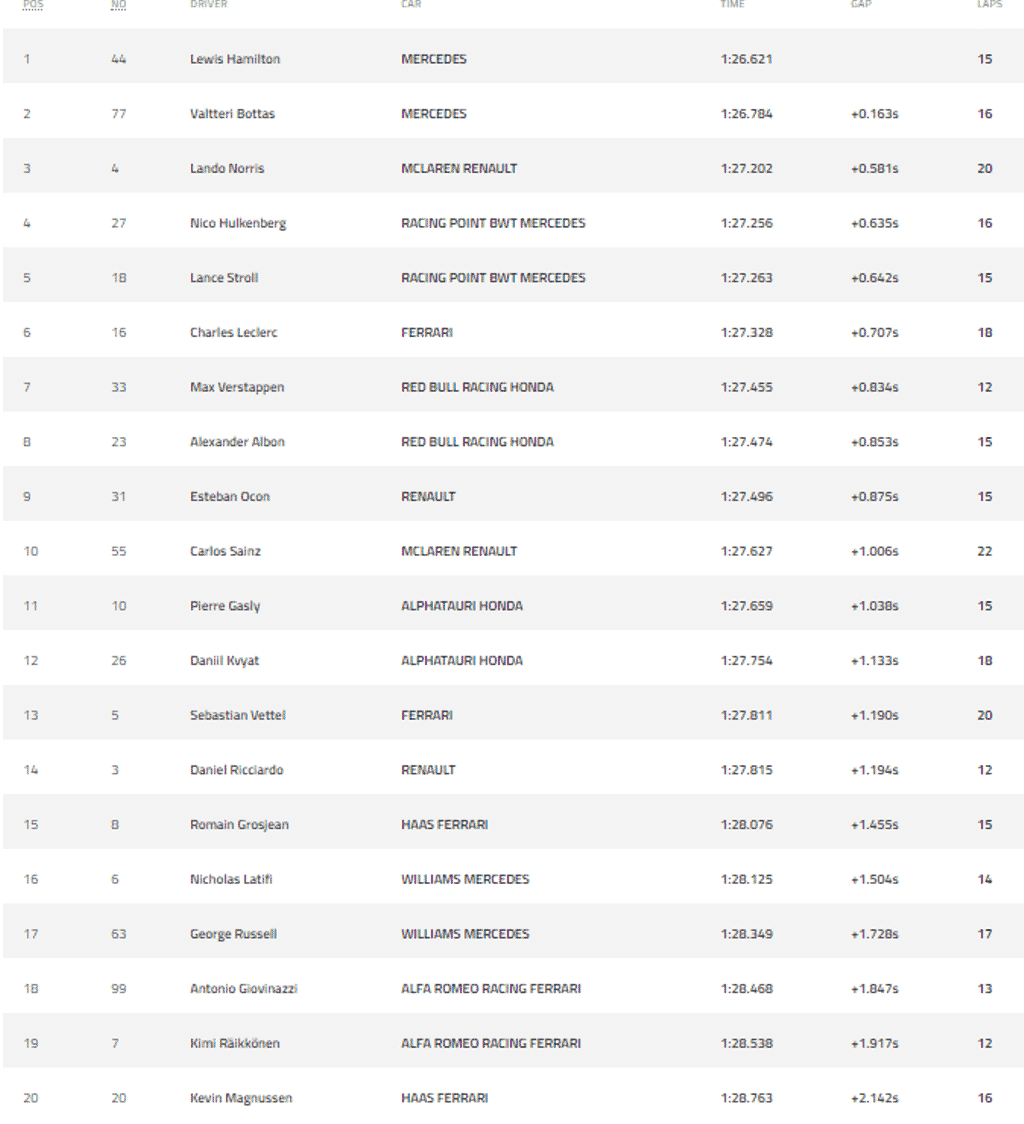 With a freshly inked contract extension in his back pocket, an inspired Valtteri Bottas got the bit between his teeth to beat Mercedes teammate Lewis Hamilton to pole position, as super sub Nico Hulkenberg took a remarkable third for the 70th Anniversary Grand Prix at Silverstone.

The Finn set the pace in every single segment of qualifying but was on the backfoot after the first runs in Q3 as Hamilton sauntered to the top of the timesheets. But Bottas refused to be rattled and while Hamilton improved again on his next effort, this time the Finn had an answer. 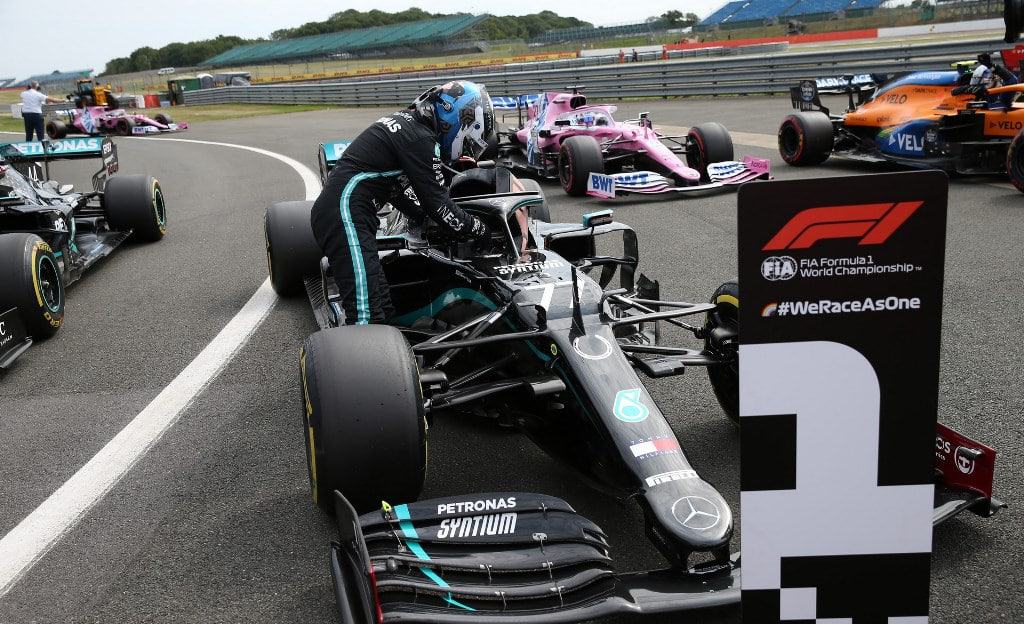 This was his 13th career pole position and sets him up nicely for the second successive race at Silverstone, having suffered the misery of a tire deflation last time out when running second, with the Finn likely to be buoyed by the fact he has won the last two races he has started from P1.

But the most impressive performance came from the pink car of Nico Hulkenberg. The German was parachuted in to replace Sergio Perez, following the Mexican’s positive test for COVID-19, last weekend but failed to take the race start because of an engine issue. This weekend has been much smoother, with Hulkenberg comfortably beating regular race driver and teammate Stroll in all segments of qualifying.

His final effort was superb, the former Renault racer setting the third-best time, inside a second of the dominant Mercedes and one-tenth of a second clear of Red Bull’s Max Verstappen. Daniel Riccardo was an impressive fifth, equalling Renault’s best of the year. 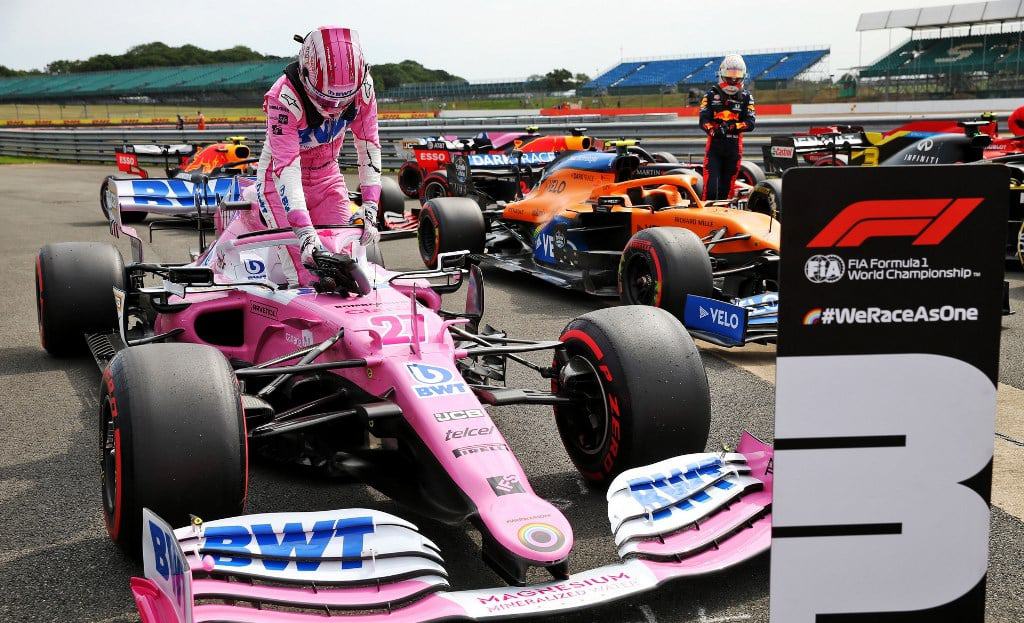 Stroll had no answer to Hulkenberg as he ended up three places back in sixth with Pierre Gasly continuing his brilliant start to the 2020 campaign with a stunning seventh for AlphaTauri. Charles Leclerc could do no better than eighth, which is Ferrari’s worst performance at Silverstone since 2014, with teammate Sebastian Vettel failing to escape Q2.

Alexander Albon ended up half a second behind teammate Verstappen, but he did at least comfortably make it through to Q3 this weekend after an early exit last time out. Lando Norris closed out the top 10 for McLaren.

Q1 – Russell makes it four successive Q2 appearances
Bottas got the better of Hamilton in the opening foray, the Finn edging the reigning world champion to the fastest time by just 0.080s. They were comfortably clear of the Red Bulls, with Alex Albon having a much more straightforward time of it this time around at Silverstone.

The Thai driver did two runs, his second was good enough for third, one place clear of Max Verstappen, who was so confident of his pace he only did the single run, allowing him to save tires for later in the session.

Elsewhere, there was drama for George Russell as he appeared to be blocked heavily by Esteban Ocon, the Williams driver describing the Frenchman’s driving as “properly dangerous”. Stewards said they would investigate the incident after the session. Update: Ocon was penalized with 3 grid places for impeding George Russell.

Both drivers made it through, with Russell impressing again as he made it through to Q2 for the fourth successive race, once again showing how much Williams has improved and how well the Briton is currently driving.

Daniil Kvyat ran wide at Stowe and reported he thought the floor was damaged in the off-track excursion. The AlphaTauri driver was the best-placed driver to fail to make Q2, with Kevin Magnussen, Nicholas Latifi and the Alfa Romeos of Antonio Giovinazzi and Kimi Raikkonen also dropping out.

Q2 – Hulkenberg shines, but Vettel struggles.
Bottas made it two from two in 70th Anniversary GP qualifying, as he set the pace once again, though, interestingly it was super substitute Hulkenberg who was second quickest, the Racing Point driver a staggering four-tenths quicker than teammate and regular race driver Lance Stroll, son of the team’s owner.

Hamilton was only third, with nine of the top 10 setting their best laps on the medium. The outlier was Max Verstappen, who rolled the dice and ran the hards instead. Succeed and he would start the race on the most durable tire, allowing him to run deeper into the race before fitting the fastest softer tire, on lighter fuel.

Of course, he got the job done, with the ninth quickest time – but there was yet more misery for Sebastian Vettel as he failed to reach Q3 for the second time this year. That compared to missing Q3 just once last year.

The driver replacing him at Ferrari, Carlos Sainz, also got the boot, as McLaren failed to reach Q3 with both cars for the first time this season. But perhaps that’s not a surprise – as he has only reached Q3 once in his as five attempts at Silverstone.

Ocon, Grosjean, and Russell were the other drivers to fail to make it into Q3.

Q3 – Bottas keeps his head to fend off Hamilton.
Hamilton has had the better of Bottas in qualifying in the last three events, but the Finn was having none of it at Silverstone this time around. He found a rhythm early in the session and though he was second, 0.116s adrift, after the first runs in Q3, he made no mistake on his final run to snatch the prime starting spot for Sunday.

Ricciardo popped in a quick lap on his first run to sit third, ahead of Hulkenberg, with Verstappen fifth as the Red Bull driver was unhappy with his medium tires. But that trio swapped positions after the final runs, with Hulkenberg coming out on top, edging out Verstappen, as Ricciardo slipped to fifth.

Albon was a strong sixth after the first runs, but he dropped to ninth, as Stroll, Leclerc, and Gasly all improved, while Norris remained 10th and last of the runners throughout. 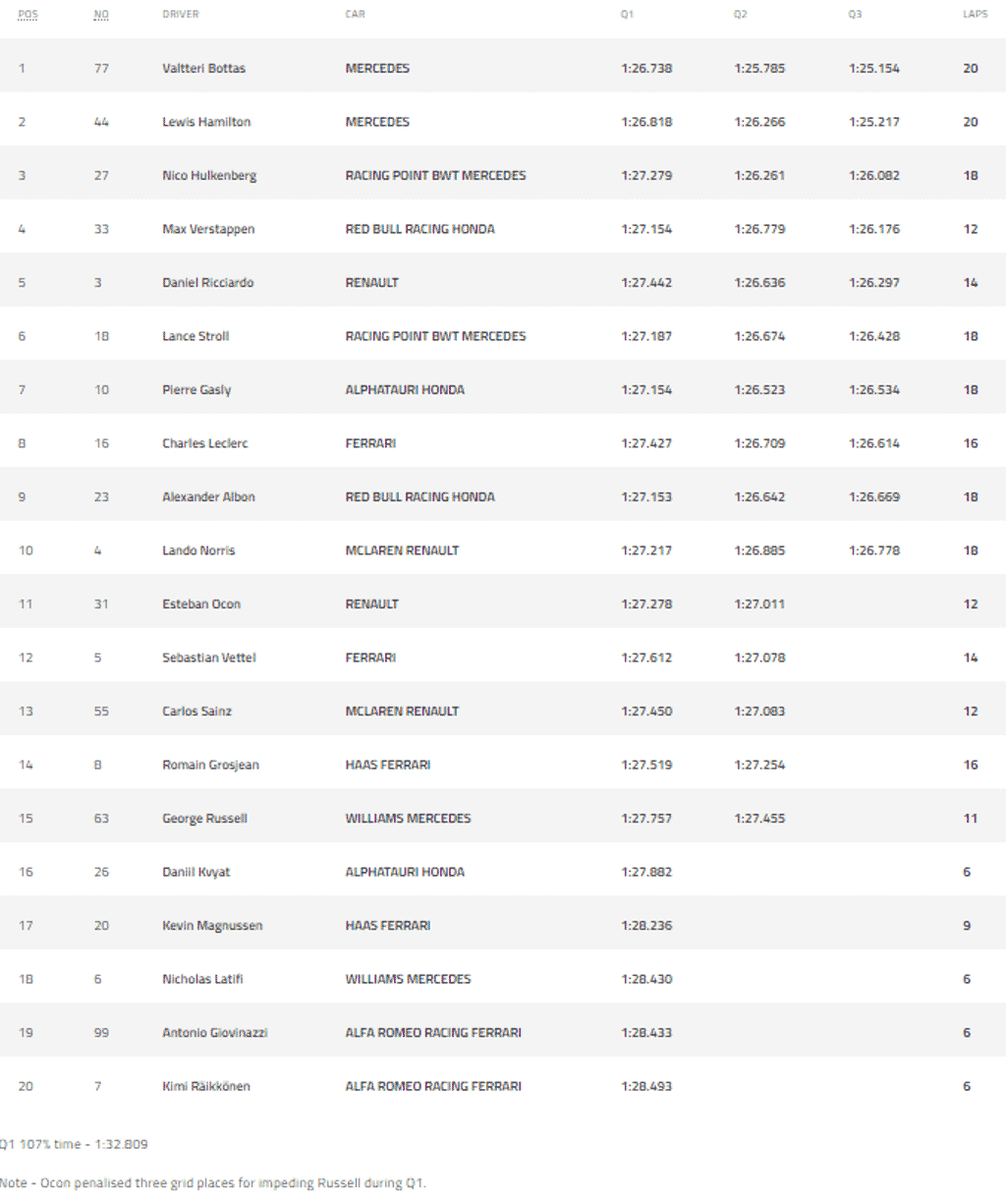 The key quote:
“It feels good,” said pole-sitter Valtteri Bottas. “I just love qualifying, especially when it goes well. It’s a nice feeling to get everything out of myself and out of the car. I think set-up wise we made good steps from last weekend, that’s why I think the qualifying performance for me was better than last weekend. Very pleased and, again, proud to drive this amazing car – it’s so quick.”

What’s next?
The 70th Anniversary Grand Prix kicks off at 1410 local time, which is 1110 UTC. Mercedes will start on pole for the ninth consecutive race at Silverstone and have their 67th front row lockout, extending records on both counts. Bottas has dropped back in the title race, but can he re-ignite his championship charge by converting pole position into a second victory of the season?