Valtteri Bottas  starts the 2019 Abu Dhabi season finale from the back of the grid – but the Finn showed there’s plenty of pace in his Mercedes W10, as he led Red Bull’s Max Verstappen in Free Practice 1 for the Abu Dhabi Grand Prix, as Ferrari’s Sebastian Vettel ended his session in the wall at Turn 19.

After retiring from the Brazilian Grand Prix last time out, Mercedes made the decision to give Bottas a new internal combustion engine, MGU-H, and turbocharger, forcing the back-of-the-grid start. But despite Bottas stating ahead of the weekend that he’d now focus on his race pace, the Finn comfortably led Free Practice 1 at Yas Marina Circuit, heading Verstappen by 0.535s.

Meanwhile, Vettel – who arrived late to Abu Dhabi after the birth of his third child – finished the session backed into the Turn 19 wall, having suffered a spin that damaged the rear-left tire of his car. That brought out a red flag that meant the session finished two minutes early, Vettel having secured P5 before that.

Ahead of him, Lewis Hamilton survived his Mercedes switching into limp home mode – caused by a sensor issue – to finish P3, ahead of the second Red Bull of Alex Albon.

Romain Grosjean was using a new, simulator-developed set-up on his Haas VF-19, and it seemed to work well, as he ended up P6, ahead of the Ferrari of Charles Leclerc. Grosjean’s teammate Magnussen was P8, heading the Alfa Romeo of Antonio Giovinazzi and the Renault of Nico Hulkenberg, who’s having his last outing for the team this weekend.

Meanwhile, there looks to be more to come from the McLaren pair, with Carlos Sainz only managing P17, one place behind his fellow Brazil podium-taker Pierre Gasly in the Toro Rosso, as Lando Norris finished 11th.

Daniel Ricciardo was forced to take an early bath in the session, his Renault R.S.19 – running a Friday power unit – spitting out flames on the hour mark before the Australian pulled up at the side of the track at Turn 21, bringing out a red flag.

“Last weekend of the year, so I guess everything’s getting a bit close [on] mileage,” Ricciardo told reporters as he trudged back to the pits. “I don’t know where it puts us for [FP2]. Hopefully, we’ll get back out there and get some running.” Renault later confirmed that they would be able to get Ricciardo out for FP2, however.

Meanwhile, Bottas was lucky to survive a spin on Ricciardo’s oil, collecting a wild moment that sent him skating onto the final corner run-off.

So, it’s advantage Mercedes in the opening session in Abu Dhabi – but with the track set to cool dramatically for FP2, expect the team who does best this evening to be the most confident for how the rest of their weekend will pan out. 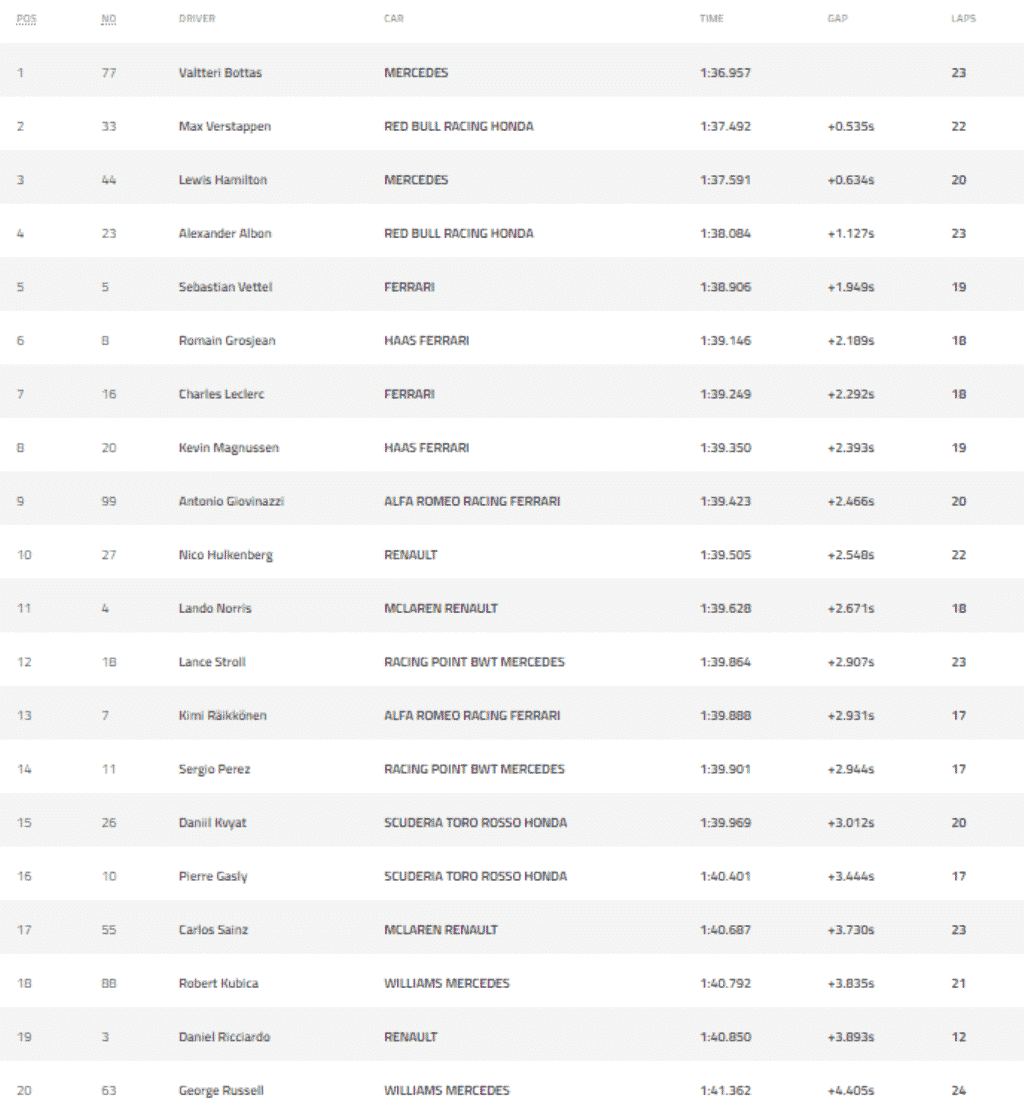