Sochi has been a Mercedes fortress since it joined the F1 calendar, but Charles Leclerc breached their defences in qualifying for the 2019 Russian Grand Prix with a scintillating lap to take pole position – his fourth P1 start in as many races…

The two-time race winner has looked like the man to beat all weekend, and he did not disappoint when it really counted, clocking a 1m31.801s around the Sochi Autodrom to finish four tenths clear of Mercedes’ Lewis Hamilton.

The last time a Ferrari driver took four successive poles was when Michael Schumacher achieved the feat across the 2000 and 2001 seasons. Incidentally, Leclerc –in only his second season in F1– was just three years old at that time.

Sebastian Vettel failed to improve on his second lap and was jumped by Hamilton, meaning he’ll start his second successive Grand Prix from third on the grid.

With Alex Albon crashing out in Q1, Red Bull’s sole Q3 representative was Max Verstappen, with the Dutchman finishing fourth – though that will become ninth after his five-place grid penalty is applied for engine component changes.

Valtteri Bottas was scrappy throughout Q3 and aborted his final run, the 2017 winner ending up fifth fastest with McLaren’s Carlos Sainz delivering a stunning final run to end up best of the rest in sixth.

Renault’s Nico Hulkenberg was seventh, a fraction behind, with Lando Norris eighth in the other McLaren. Haas’ Romain Grosjean and Renault’s Daniel Ricciardo completed the top 10.

But the day belonged to a red-hot Leclerc, who took a sixth pole position of the season – the best record of any driver on the 2019 grid.

Q1 – Albon crashes, as Vettel makes hard work of it

Only 19 drivers made an appearance in the opening part of qualifying, with Daniil Kvyat in his civvies while his Toro Rosso team completed another Honda power unit change.

Ferrari sent Vettel and Leclerc out on the medium tires, the only team to do so. Leclerc set a competitive time with ease, but his teammate made life hard for himself.

He ran wide at Turn 13 on his first run, forcing him to back out of the lap. The German looked set to improve next time around but had to ease off again when Robert Kubica went off in the final sector. And then on his third attempt, he had to abort when the session was red-flagged after Alexander Albon crashed – again at Turn 13.

When the session re-started, Ferrari was forced to use a new set of softs with Vettel and at the fourth time of asking, he made it count to go quickest of all, a couple of tenths clear of Lewis Hamilton with Max Verstappen slotting into third.

Kimi Raikkonen made a mess of the final corner, undoing his hard work in the final two sectors – and it proved costly when his Alfa Romeo teammate Antonio Giovinazzi hooked up a tidy lap to knock Raikkonen into the drop zone and out of qualifying.

The Williams duo of George Russell, who complained to his team that they released him into traffic again as they did in Singapore, and Kubica plus Albon and Kvyat were the others to take an early bath.

Mercedes have failed to match Ferrari so far this weekend, which is perhaps why they took the decision to run the mediums in the second part of qualifying while the red cars and Red Bull’s Verstappen went with the softs.

Leclerc set a scintillating pace once more to go quickest, a tenth ahead of teammate Vettel who had a cleaner session running a used set of softs followed by a fresh set.

Hamilton and Bottas set slick lap times, too, and aborted their second run on the softs, which means they will start Sunday’s race on the mediums, in contrast to Ferrari and Verstappen sticking with the softs.

Romain Grosjean showed a supreme turn of pace to get through in sixth, but his Haas teammate Kevin Magnussen was not so lucky after a very scruffy couple of runs.

The Renaults of Daniel Ricciardo and Nico Hulkenberg improved on their final runs to scrape into the top 10, behind the McLaren duo of Lando Norris and Carlos Sainz, at the expense of Pierre Gasly and Sergio Perez.

Leclerc wasted very little time stamping his authority in the final segment of qualifying, the Monegasque lighting up the timesheets as he went quickest of all after the first runs.

His teammate Vettel was his closest challenger, but he was still three tenths off the pace as he struggled to hook three tidy sectors together.

Second time around, Vettel couldn’t respond, clocking a disappointing opening sector, but Leclerc had no such problems. In fact, he went even quicker to take a brilliant fourth straight pole.

That means he has now out-qualified Vettel in each of the last nine Grands Prix, stretching back to the Canadian Grand Prix when the German started on pole.

Hamilton improved on his second run to go second, putting the championship leader in a strong position to get the tow of Leclerc into Turn 3 at the start of tomorrow’s race and snatch the lead.

It’s the first time in five years he has outqualified a teammate at Sochi with Bottas down in fifth.

Sainz will line-up fifth, though, courtesy of Verstappen’s penalty, equalling his career-best start (Spain 2015 and Hungary 2018 were the others), with Hulkenberg securing his second top-six start in the last three races.

Norris had appeared quicker than Sainz early in qualifying, but missed out by a fraction as he ended up eighth, with Ricciardo – who ended up 10th – was outqualified by a team mate for the first time in Sochi. 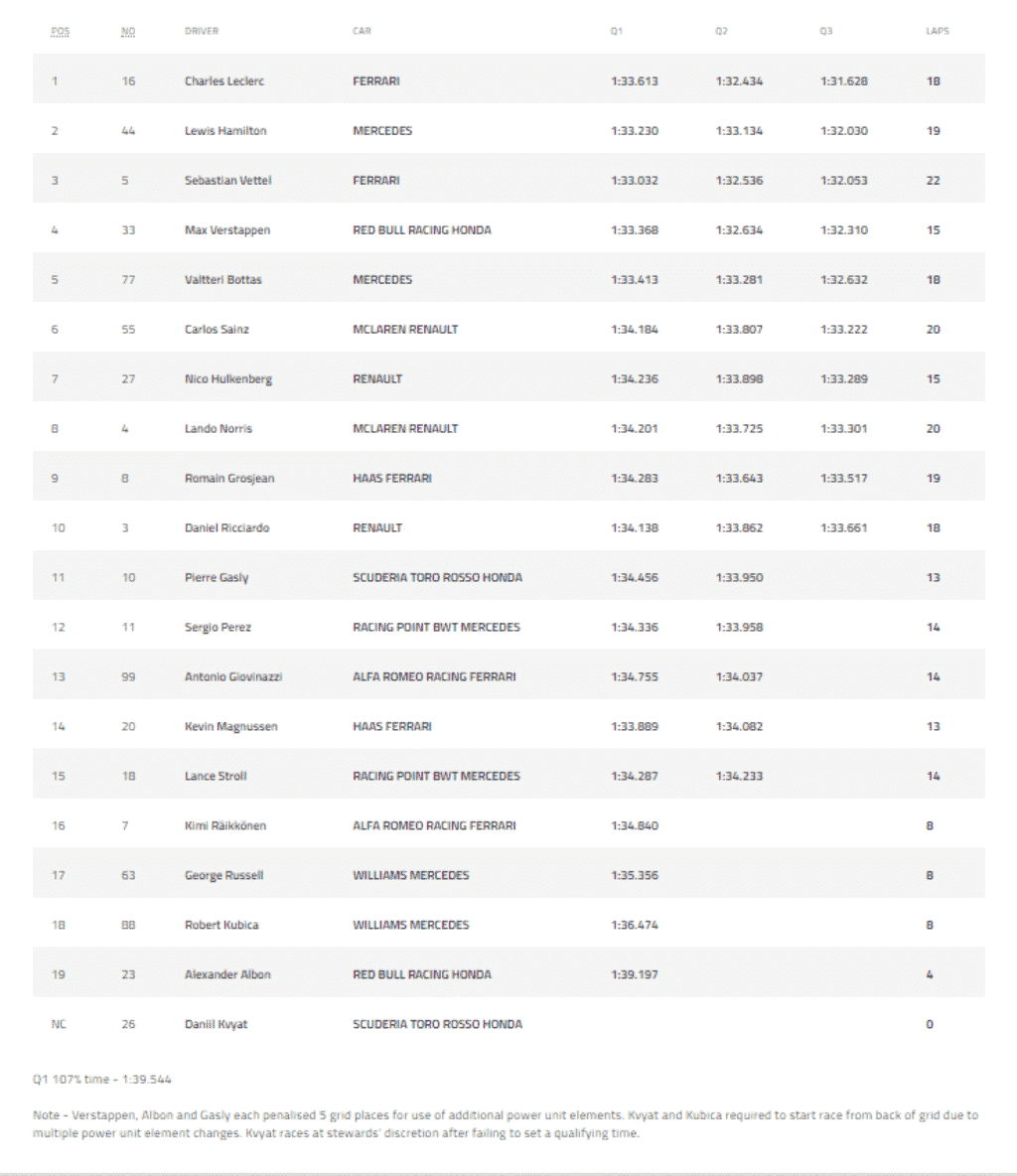 “It felt amazing, it definitely feels great to back on pole but I don’t know if it’s the best track to start on pole. The straight is very long after the start so tomorrow the start will be very important as always but here probably even more because of the straight length.” – Charles Leclerc

The Russian Grand Prix kicks off at 1410 local time, which is 1310 CET. Ferrari is on a roll, with three victories in a row. Can they make it four, for the first time since 2008? And is Leclerc the man to do it – or will Vettel repeat his Singapore trick?