Although at a somewhat uncomfortable time interval for European viewers, Bathurst fully deserved the hours without sleep and tons of coffee poured down the throath rather than shots at the bar. IGTC started again in a great way with a race that for the second consecutive year offered us a first time winner.

The weekend in Australia started with good and bad, but if we look at the many incidents in training and qualifications I think the latter is more plausible. The race started as usual in the dark, just before the dawn of the antipodes. 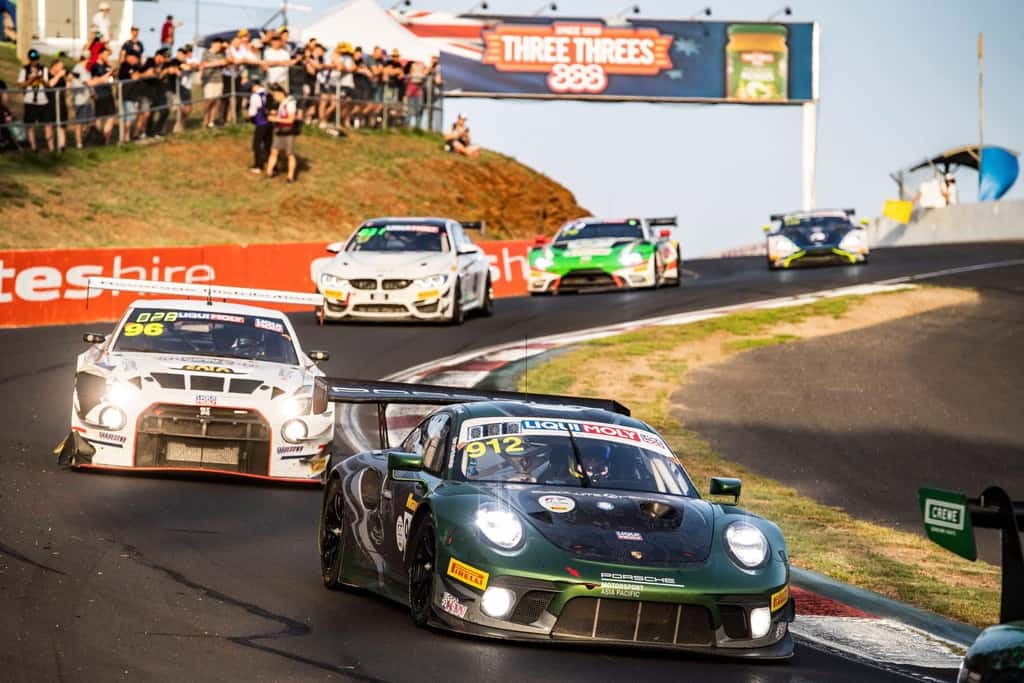 From pole position the #911 Absolute Racing Porsche with Patrick Pilet behind the wheel, followed by Ben Barnicoat in the cockpit of the #60 McLaren 720S of Team 59Racing. But the real star of the race was Maxi Buhk who after a few turns takes the #999 GruppeM Mercedes directly to the forefront having a more than brave start.

Mercedes and McLaren were in the fight for first place after a clean start without major incidents. Barnicoat would soon take over as a result of exceeding the track limits which resulted in minor contact between the two cars. The race was slowly settling in and soon the sun would be rising in the sky of Australia. 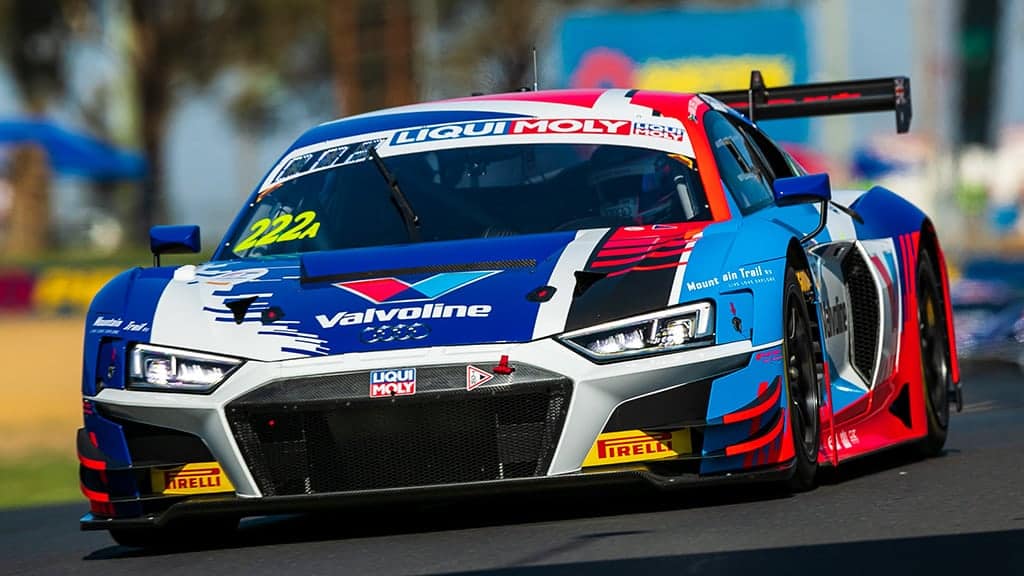 The first hours were to be marked by a series of incidents that started with a tire puncture on the #20 MARC II while another similar model faced a strong fire in the engine compartment in the pitlane. Then followed by the first safety car neutralization after the terrible crash of the #188 Aston  Garage 59 from Skyline, the first one to drop out of the race.

It did not last long after this incident and the race is again interrupted after a new model meets the protection wall, this time being the #6 Lamborghini of Wall Racing. And for the drama to be complete, a little later we witness the abandonment of the #22 Audi after a spectacular new accident triggered by a contact even with the #2 sister car. 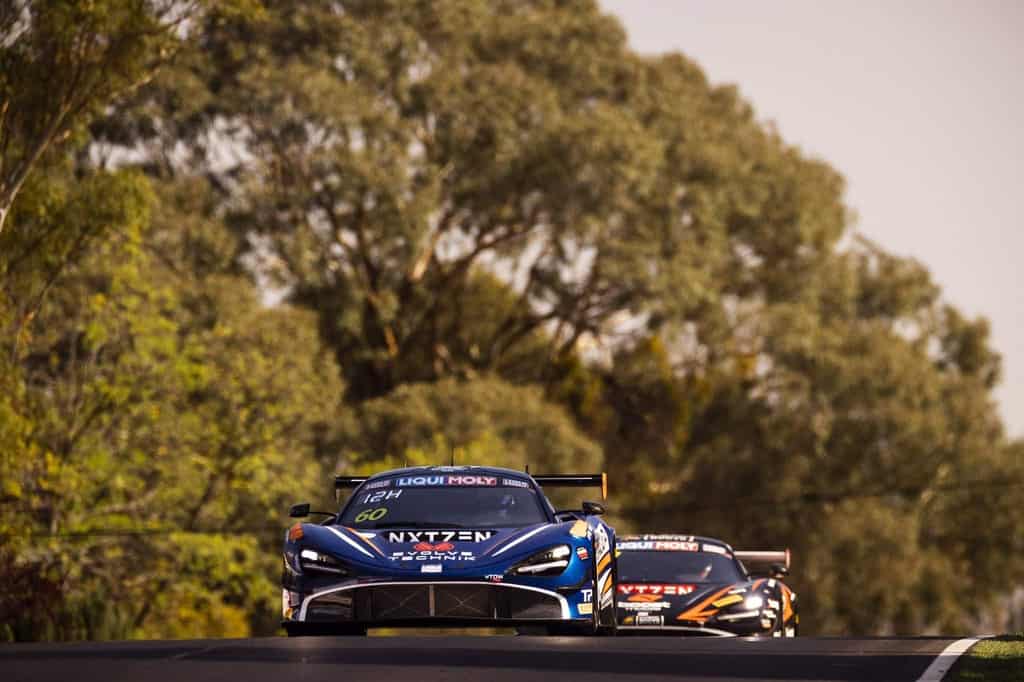 Well, after all this madness the race calmed down and had a good time running under green and the fight in the top 10 was close with Mercedes, Porsche, Bentley, McLaren and Nissan all virtually on the podium and in position for victory at some stage. I have not mentioned the Audi teams, it was a disappointing event for them on all fronts.

With two cars left, the hopes were still there, even though overall the R8 did not rise to the performances displayed by the other competitors. Unfortunately both crews were hit by problems, the faulty speed sensor for the #2 car while for the #222 car after two tyre punctures it seemed  impossible to recover anything. 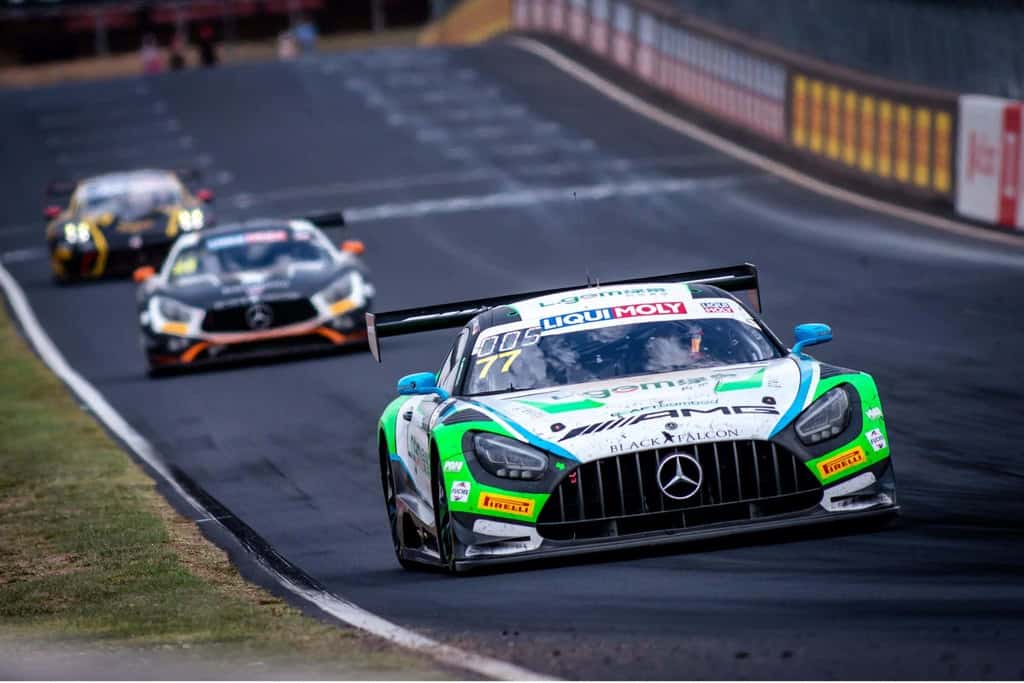 Another car with claims to the victory that was hit with a tyre puncture was the #911 Porsche and when you add a penalty of 15 seconds for a faulty pitstop you end up with a lap lost to the leaders. Fortunately for them, however, towards the end they found themselves in a pretty good position. The same penalty would be suffered by the #999 Mercedes which in turn was going to recover the lost time.

And to put an end to the string of issues, we also list the #76 Aston R-Motorsport that came into the garage to change the front splitter while the only BMW on the list, the #34 Walkenhorst, had to drop out of the race due to troubles with the hood of the car, problems that eventually led to overheating the engine. In this case, all these issues started from a slight contact with a kangaroo, the same kangaroos that gave some headaches during the training sessions. Also other competitors with problems were the #1 Porsche, the #63 Lamborghini and the #30 Honda. 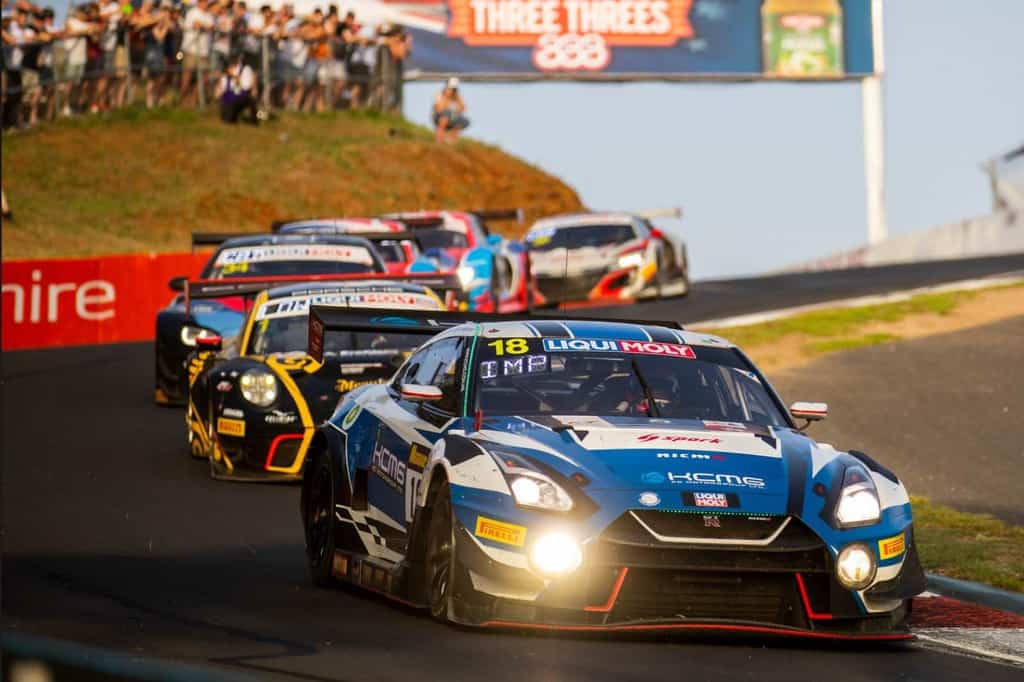 Finally, let’s move on to the positive things. At the front of the pack we have a surprise from the Bentley boys with their #7 Continental GT3 which advanced to the first position where he was to lead the race for a good time. The fact that the giant from Crewe was doing really well is also reflected in the ascent of the #8 sister car to the front, and this was remarkable after the crew had started the race from the last position.

Unfortunately for the #8 Bentley, the thing was about to end ugly, Oliver Jarvis getting out of control and ending with the front in the opposite direction from the running direction. He could not turn the massive Bentley Continental around on the circuit and was eventually towed away from his awkward position. Fortunately, the British still had a car running for the victory. 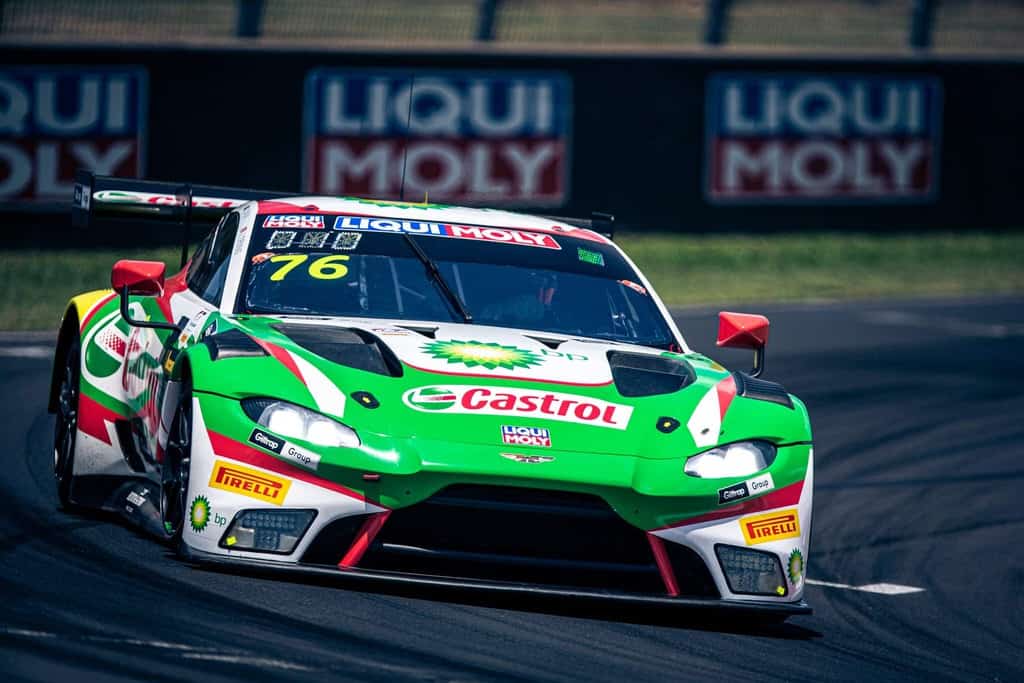 After the restart I witnessed a bumper-to-bumper duel for the second place between the Mercedes’ #999 and the #888, all this time the Bentley was quietly driving away. But for him the emotions were going to be at the highest levels, Jules Gounon at the wheel is chosen with a right-rear puncture, fortunately just before the pitlane entrance so the time wasted was not too much.

However, the Bentley came out first onto the circuit and because it was the last pitstop, they could quietly head to their potential first victory at Bathurst. Faith may have lent a helping hand as their rivals at GruppeM suffer a tyre puncture in the end and in their case a penalty was applied immediately after the end of the race because Marciello did not stop the car’s engine during the pit. 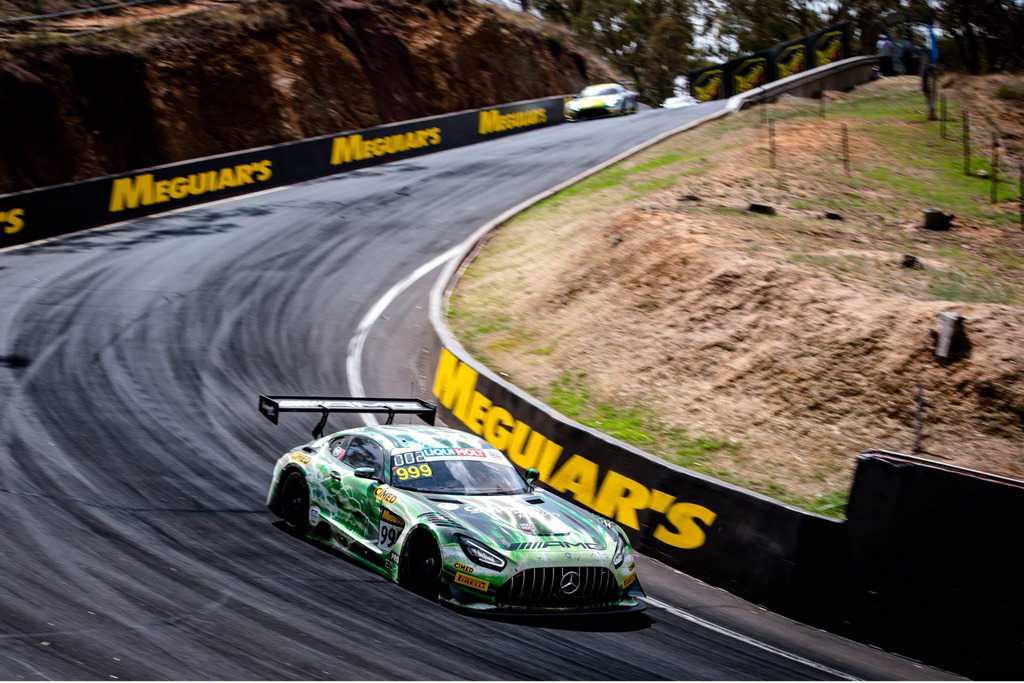 Even though Marciello regained his second place from the #60 McLaren on the circuit, after being awarded the penalty, he was ranked sixth in the final order. Another car that was honourable throughout the race and would have had a chance at a podium was the KCMG #18 Nissan which unfortunately had problems with the brakes towards the end.

For fourth place, which would eventually be third, the #888 Mercedes and the #911 Porsche were duelling. Shane van Gisbergen at the wheel of the AMG GT3 model won that duel, leaving the Porsche without podium. The two guys from McLaren finished and the big winners were the Bentley boys who, like Porsche last year, claimed their first victory at Mount Panorama. 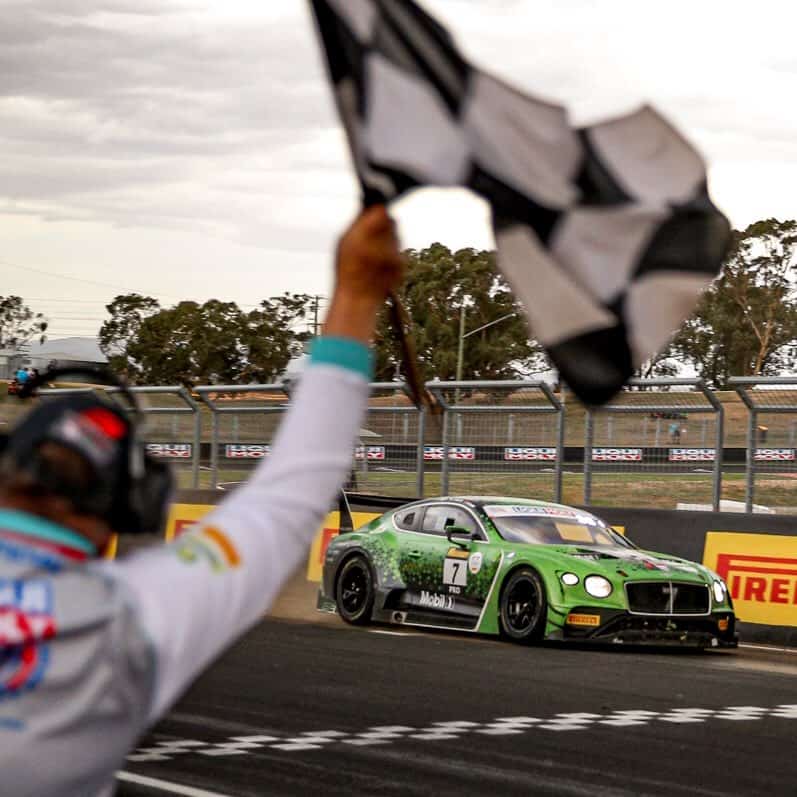 If we were to pick up after what happened in Daytona a week ago, it seems that these days it is even better to have a big car. All jokes aside, Bentley impressed everyone with the quick laps they made, and they fully deserved this victory under a threatening sky with a few lightning bolts here and there.

The rain threatened the mountain course during the last hours and wind gusts were felt on certain parts of the circuit. And to pass a bit on the destiny side and maybe coincidence, the rain began to fall in the pitlane line mere seconds after the race ended, the victory being celebrated by jumping through puddles. 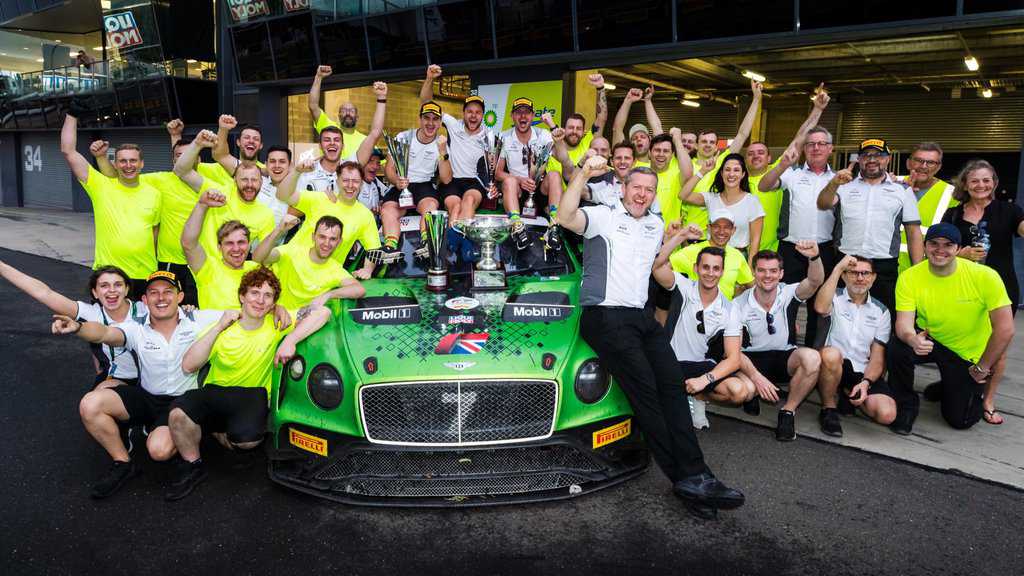 A nice end to a race that has kept us in the dark all the way to the end and whose only disadvantage is that we have to wait another 365 days until we get to face the mountain again. With this victory Bentley became leader in the IGTC ranking, whose second round this year is the legendary 24-hour Spa Francorchamps event scheduled for the end of July. 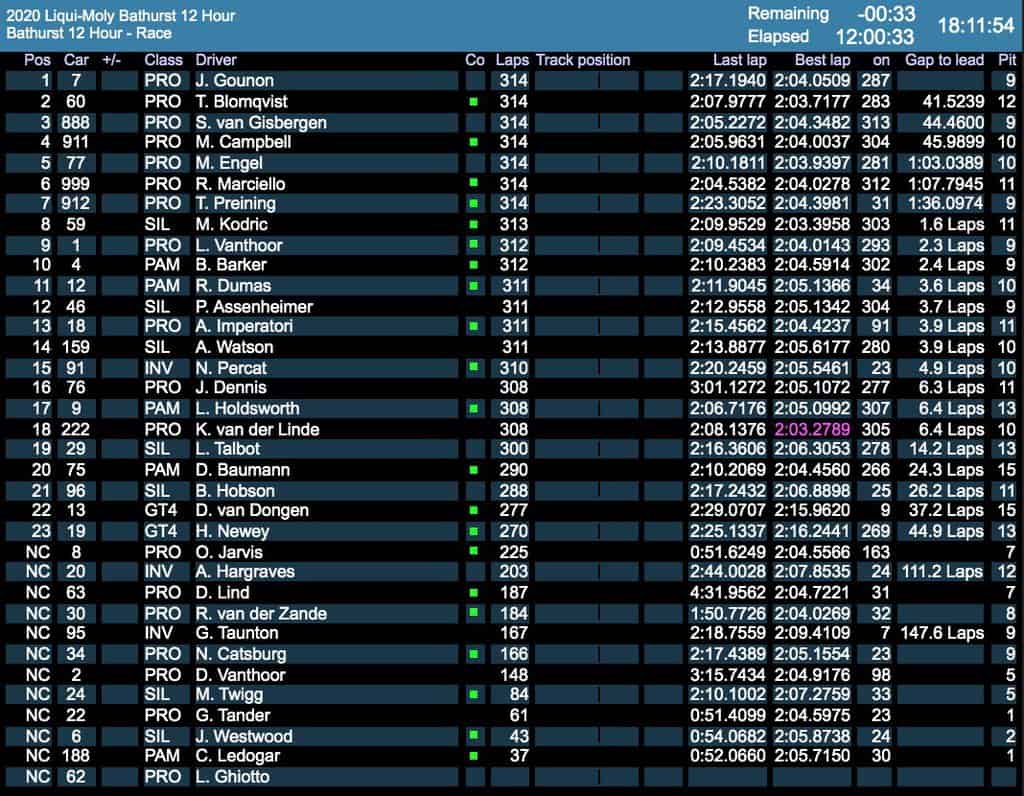 Monaco lay out plan to run trifecta of races in 2021