Zolder 24 Hours podium finisher Alex Cascatău will be back behind the wheel of a Norma M20FC this weekend as he begins his preparation...
More
12 July, 2019

Pierre Gasly strained himself and managed to finish in first place during the first Free Practice session of the Grand Prix of Great Britain at the Silverstone circuit.

We had a relatively quiet training session today at Silverstone. I had a little sun, a few drops of rain and small accidents that managed to give a bit of character to a relatively insipid session during a British GP weekend that will, fortunately, be around for at least another five years on the Northamptonshire circuit.

In this first session, as expected, the time tables were dominated by the two Mercedes cars almost constantly. The Brackley-based team seems to have retained much of their advantage over their rivals, and the two silver arrows drivers have sat comfortably in the first two positions on the table until the end of the session. Valtteri Bottas was the first to top the list this morning, but his time was on the softest tires in the Pirelli offer this weekend, while Lewis Hamilton ran on Medium tires.

The typical conditions at Silverstone led to several spins on the circuit, among those affected names such as Lewis Hamilton and Max Verstappen, but even before the heavy rain hit the circuit, Romain Grosjean managed to spin under normal conditions in the pit-lane when he was heading out onto the circuit, practically destroying his front wing. An amateur class moment for the French driver who had no less than three spins in this first Free Practice session.

Kimi Raikkonen was forced to being towed off the circuit, as his car stopped, which also brought out the red flag. His Alfa Romeo F1 car suffered from an engine problem. The Alfa Romeo team later admitted that it must be changed, this incident effectively brought the FP1 session of the Finnish F1 veteran to an end.

However, the end of the session brought a change, the two Red Bulls began to put in quick laps again, and after a good lap of Max Verstappen which saw him split the 2 Mercedes drivers and setting a time between Lewis and Valtteri, Pierre Gasly put in a very fast lap-time and basically took over the first position in this session.

In the end, Pierre’s lap-time in the timing sheets was 1m27.173s being 4,5 tenths faster than Valtteri Bottas and more than a second faster than the times of both Ferrari drivers. Max’s time put him in P3 and home favourite Lewis Hamilton finished in 4th place, 9-tenths slower than the leader of this session, but set on Medium compound tires under completely different conditions.

The two Ferrari cars finished in 5th (Leclerc) and 6th (Vettel) place during this session, followed by the two Renault drivers, Nico Hulkenberg (7th) and Daniel Ricciardo (8th). The top 10 was completed by Alexander Albon for Toro Rosso in 9th place and Carlos Sainz Jr. for McLaren closing the Top-10. With McLaren Rookie Lando Norris only 0,08 seconds behind him. 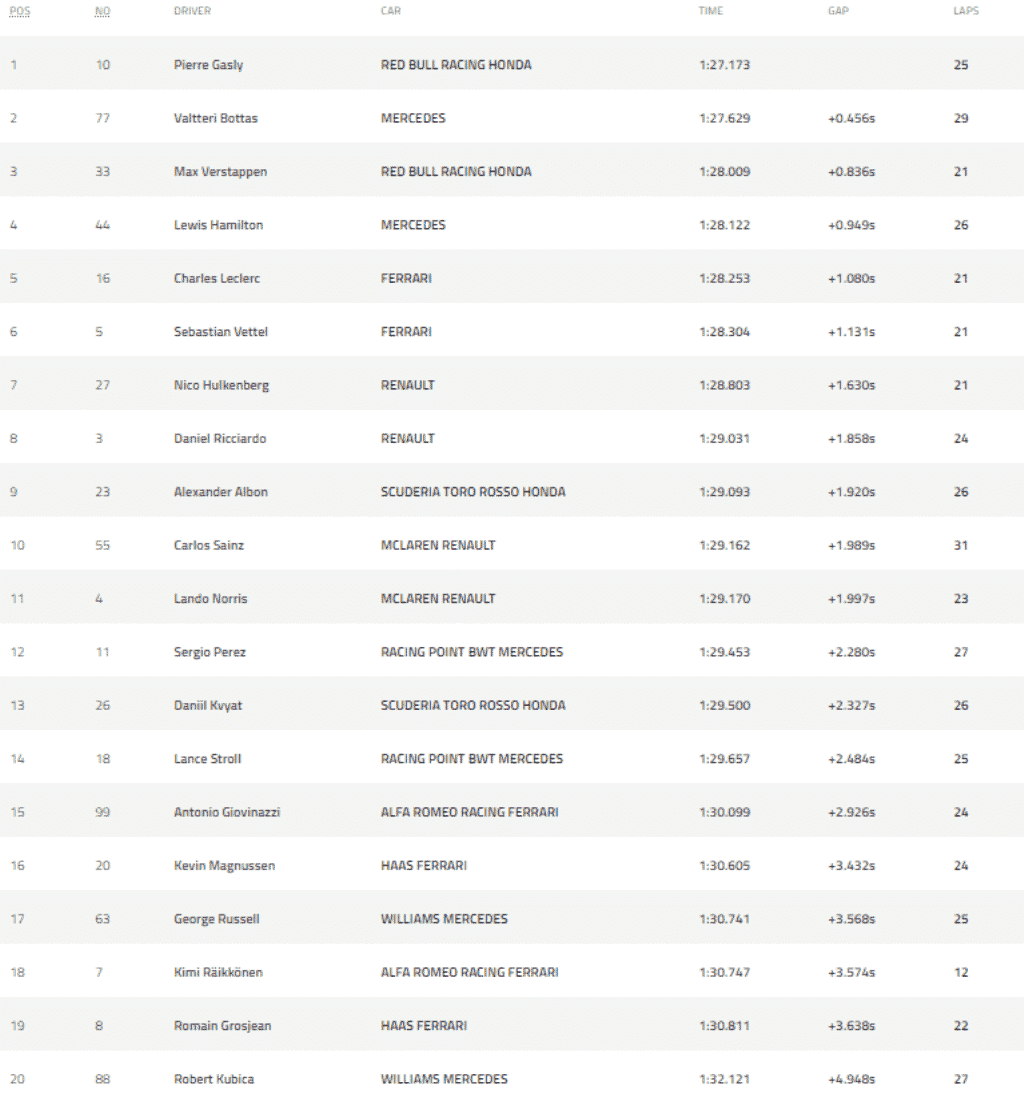 Valtteri Bottas was marginally faster than his teammate Lewis Hamilton, finishing as the fastest man in the second Free Practice session on Friday at Silverstone in a Mercedes One-Two with the two Ferrari cars not far behind them.

The Finnish Mercedes driver was marginally faster than his team-mate on home ground and succeeded in imposing a 1m26.732s lap-time. As the drivers began to get out on soft compound tires, the Fin had already managed to set the fastest lap time on Medium tires, and when changing to soft tires, his lap times did not show any immediate significant improvement. Later, however, Bottas managed to set a good time on Soft tires that ultimately was good enough for P1.

The distance between the two Mercedes drivers at the end was only a mere 0.069s and Bottas, unfortunately, lost some time, his car having a problem with a spark plug which the team decided to replace for precautionary reasons.

The two Ferrari drivers can breathe somewhat relieved after this second session. The distance between the two teams seemed to be much higher in the morning, but things seem to have somewhat normalized. Charles Leclerc finished FP2 in the 3rd position being only two tenths slower than Valtteri Bottas, and his teammate, Sebastian Vettel, finished the session in 4th.

The 8th place was for Carlos Sainz which points out that the speed at McLaren is not accidental. The Papaya team seems to have firmly settled as “Best of the Rest” and the direction they are heading in seems very promising. The top 10 was completed by rookie Alexander Albon in his Toro Rosso, who once again showed a very impressive performance in 9th followed by Racing Point veteran Sergio Perez.

Several drivers had problems in this session, including Romain Grosjean, George Russell, and Daniel Ricciardo. Russell had trouble with the gearbox and the team will investigate the possible solutions this evening, while Daniel Ricciardo was forced to park his car on the circuit because of a problem with the Power Unit (the team was already using a Spec-B engine, so there should not be any penalty here). 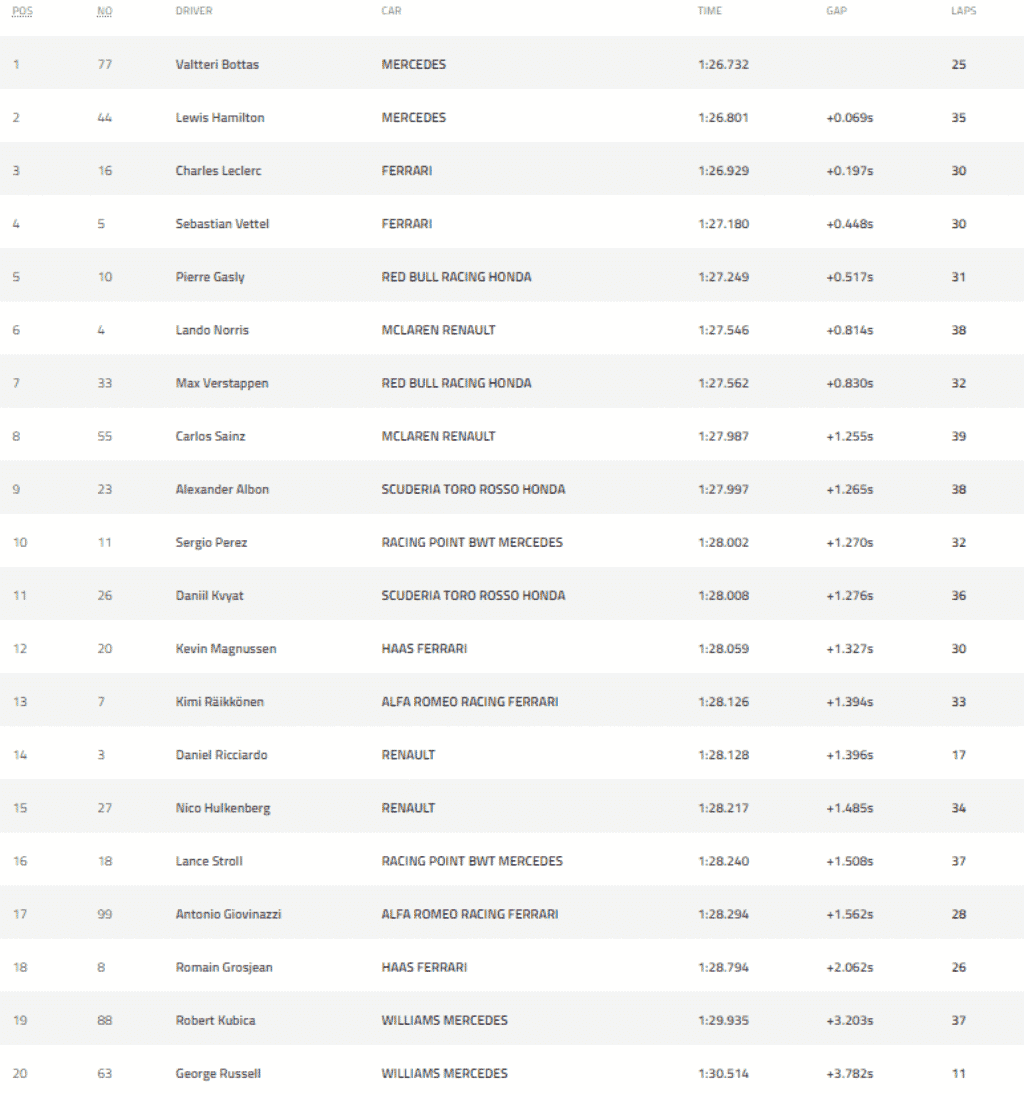 Formula 1 returns tomorrow with Free Practice 3 and the Qualifying Session for the 2019 British Grand Prix.

F1: Ferrari will not be a happy family in 2020 says Brown